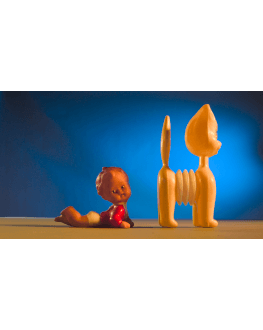 An idea of the great filmmaker S.M. Eisenstein provoked the making of this short film in three parts: first, a montage of the gestures of Daumier's character, as Eisenstein envisaged. Then, for some of them we added the original texts the caricatures had. In the last part, we took the liberty to use the caricatures as a commentary for some actual news.

After 20 years of silence, Olga travels back to the house of her great-grandparents, where she spent her childhood. The long-awaited family reunion interferes with her attempts to overcome her childhood fears and confront her uncle, who hid his double personality for decades.

Alternating between Afghanistan and Romania, the story of a Romanian soldier intertwines with that of an Afghan child, in a film that transposes the reality of war onto every-day images.

The life of human beings, seen from birth to old age. Only that this generic life is not represented with humans, but with the artefacts that we the humans have created for our children (or should we say “cubs”?), in order to prepare them for life: the toys. So, the film is a collage of scenes in which the toys help us to better understand a possible essence of our life.