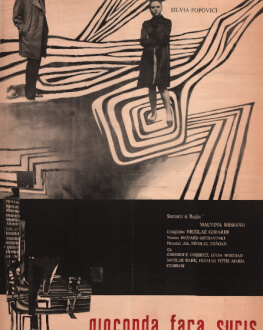 GIOCONDA WITHOUT THAT SMILE

By chance, Caius (Ion Marinescu), Irina (Silvia Popovici) and Cosma (Gheorghe Cozorici), three former schoolmates, meet again, after ten years, in the industrial complex where Irina now works. Both men loved her once, but after a short love affair with Caius, separation followed. The three recall the objective and subjective reasons that once had brought them close and then formed the grounds of their present life.

The film premiered in Romania April 23rd, 1968 and it is the film debut of the director Malvina Urșianu.