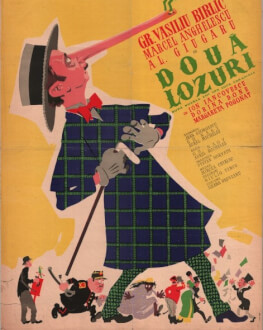 Screenplay: Jean Georgescu, Gheorghe Nagji, Aurel Miheles, adaptation of the short story with the same title by I. L. Caragiale

Lefter Popescu, a modest office worker in Bucharest at the end of the XIXth century, urged by his cup and can fellows, buys two lottery tickets. After a while he finds out that his numbers are the same with the winning numbers. Since he does not find his tickets anymore, Lefter starts a desperate campaign to search the tickets. He turns his house upside down and he aggresses on two gypsy women to whom his wife had sold a coat. Finally, to his great delight, he finds the tickets at the office. He gives up his job, but when he goes to collect his money, he sees that the numbers that were supposed to make him rich are inverted: the winning number of one lottery is written on the ticket of the other, so they not at all winning. This dramatic situation drives Lefter mad.

PLANETA MAIMUŢELOR / PLANET OF THE APES