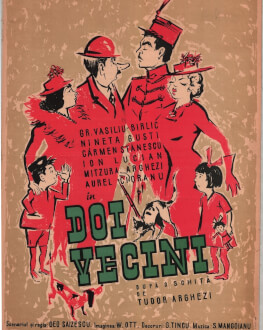 Screnplay: Geo Saizescu, adaptation of the sketch with the same title by Tudor Arghezi

Two neighbours, a lawyer (Grigore Vasiliu-Birlic) and an officer (Ion Lucian) can’t stand each other and find fault with one another. The wives and the children also participate in this psychological war. The only ones beyond all the quarrels are the lawyer’s house maid and the officer’s orderly that keep a friendly relationship, slandering on the account of their masters. After numerous comical situations, the families reconcile.

The film premiered in Romania June 8th, 1959 and it is the fiction debut of the director Geo Saizescu.