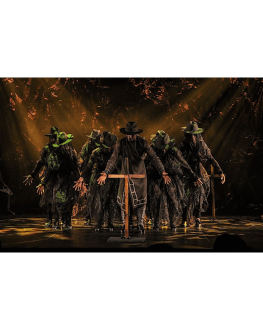 Performance presented in Isizulu and English, with translation into Romanian and English.

Gregory Maqoma, internationally celebrated choreographer, dancer, social entrepreneur and recipient of French Government’s “Chevalier de L’ordre des Arts et Lettre” (Knight of the Arts and Literature award) brings author Zakes Mda’s mourner, Toloki, to life on stage in the dance piece, “Cion: Requiem of Ravel’s Bolero”. Mda attained global renown with “Ways of Dying” (1995), his seminal first novel that featured the unforgettable character Toloki, a professional mourner at township funerals during South Africa’s transition to democracy. Mda’s writing is entrenched in African values, ethics and offers a broader view of South Africa as a complex animal with unique cultures. In “Cion”, the follow-up to “Ways of Dying”, Mda revisits Toloki a decade later. Like the author himself, the character is now living in the United States, where he uncovers the story of runaway slaves who were the ancestors of an impoverished Southern family. In this dance production, Maqoma draws inspiration from the multifaceted character of Toloki, whom he embodies in a solo and is joined on stage by eight gifted dancers from the Vuyani stable. The character is set against the dark cloud of his country of birth, South Africa, and uses this as a palette to confront the notion of fear: of existing, of religion, of the self.