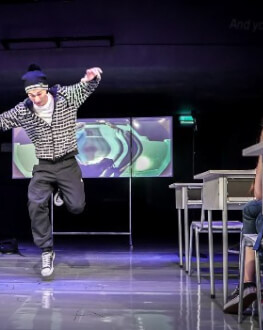 THE 20TH OF NOVEMBER

a performance by Eugen Jebeleanu

ASSISTANT TO THE DIRECTOR: Maria Popovici

Performance not recommended under 12 years old

The 20th of November is the story of a teenager transformed by the society into an executioner.

On 20 November 2016, in Emsdetten, an 18-years-old teenager returns to his former school, being on the rampage and starts shooting as many people as he can, including himself.

Based on this true story, Lars Norén creates a documented fictional play illustrating the ruined life of an abused young man. The reason for the incommensurable revenge are the violent words being addressed during his childhood. Norén’s script is about nowadays capitalist Western Europe confronting with social identity problems, such as terrorism and the 2015 immigration wave.

In The 20th of November, Lars Norén analyzes the psychology and mechanism of violence which determines the individual to pass from the position of an assaulted person to aggressor and also the repercussions of a flawed education that can create monsters.

An impactful and poetic script about the problems of the modern society.

A performance presenting a broken adolescence.

The Last Raid of HumanKind