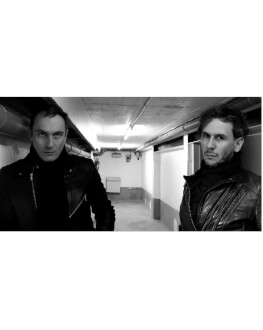 Waves With No Ends presents VARSOVIE.

#postpunk #darkrock
____________
Between post-punk and dark-rock, VARSOVIE is created in 2005 at Grenoble (France) by Arnault Destal (drums / lyrics / music) and Grégory Catherina (vocals / guitars / music).
.
VARSOVIE's third album "Coups et Blessures" is out in May 2018, after signing with Sundust Records the same year.
Still with French lyrics and on a tight, nervous, and melancholic line, those 9 new songs continue to reformulate the vertigos of our time through some emblematic figures and historical or intimate crisis.

If the album has been entirely created by the founding core, VARSOVIE remains a trio on stage. No message to deliver, except an attempt to give again a meaning with the available weapons.