Man with a Movie Camera Cine-concert 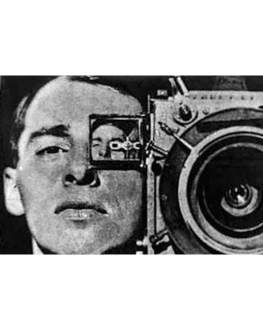 Man with a Movie Camera, 1929, is a cult experimental film, directed by Dziga Vertov. Although its appearance generated intense criticism related to editing, frame rate and content, the development of the cinema made it possible for this film to be listed by the British Film Institute in 2012 as one of the 10 most important film productions that influenced the image world.

The documentary shows urban life in Soviet cities in the late 1920s, the followed characters are people, modern industrialized life and daily activities, seen by the cameraman on the move. The documentary is recognized today for the innovative filming techniques introduced by Vertov in the cinematic universe: fast frame movement, slow motion, freeze, frame jumping, close-ups, reverse filming, stop motion; all these effects ran for the first time on big screens thanks to the production of Man with a Movie Camera.

The Abator Industries group has chosen to soundly illustrate this silent documentary as a reverence for the innovative gesture that this production has marked in the history of cinema.

Abator Industries is an independent musical collective, from Bucharest, directed in the area of free improvisation. The group, which sends through its sound approaches to contemporary music, ambient, psychedelic sounds and various experimental trends, has participated in a wide range of performative experiences, holding in the last 10 years both concept concerts and silent film screenings accompanied by live music.