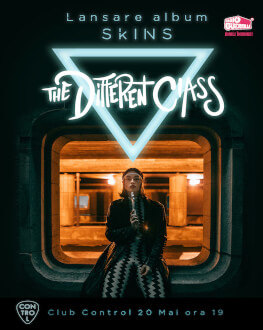 The Different Class is a power-trio that lives to infuse a new instrumental sound in the electric age we are living in. The band engages in a blend of indie/pop-rock. The Different Class navigates with confidence and vulnerability such shifting terrains inhabited by a feeling of unresolved tension, a unifying force, and a catalyst for change. Being different and distinctive, daring to step outside of the accepted overworked pattern is an integral part of the band’s musical journey.
The Different Class has always written with startling candor on feelings and identity – topics which are now taken to greater heights on their new album 'Skins'. And on this road to their upcoming record, the band has felt even more comfortable diving into the indie-electronica sound.
The Different Class is now happy to announce that 'Skins' is finally coming to Control Club, Bucharest. The band will premiere their new album with a special concert, so grab your ticket!