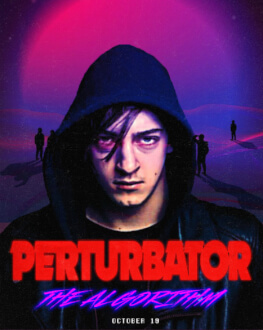 “New Model” is the sound of change. Dark electro master Perturbator – who received massive acclaim as the face of retrosynth – breaks free from the overused clichés of “synthwave.”
“New Model” is no longer synthwave. It's purely a dark electronic music release.

In 2012, Perturbator's onslaught of initial releases (“Night Driving Avenger,” “Terror 404,” “Nocturne City,” and “I Am the Night”) rocketed him through the ranks of retrosynth producers – receiving tons of accolades and comparisons to JOHN CARPENTER, GOBLIN, and VANGELIS. As he continued to hone his skills as a producer, Perturbator actively searched for something deeper within electronic music.

This took a darker turn with his 2014 smash breakthrough “Dangerous Days” and went deeper into the mire with 2016's Billboard-chart topping “The Uncanny Valley.”But James “Perturbator” Kent was feeling the limitations of the genre he helped redefine.Going forward, “New Model” eschews the nostalgia and pop culture references controlling the synthwave scene, feeling that they interfere with true subject matter. Of course, there are a vast array of influences at work on “New Model” - ranging from KRAFTWERK to LORN to D.A.F and NINE INCH NAILS – but Kent wanted to break out and explore releasing music on its own merit, rather than regurgitating tropes. “'New Model' continues Perturbator's legacy of exploring the future,” Kent states, “but this future is one based in our own eerie reality and not the retrofuturistic fantasy explored on 'I Am the Night,' 'Dangerous Days,' or 'The Uncanny Valley.'”