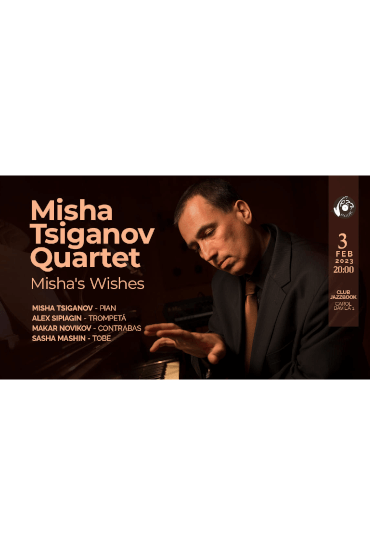 Well-established New York-based pianist, composer and arranger Misha Tsiganov, who has appeared on countless albums throughout his career, including 4 Criss Cross albums, presents his quartet as a leader. Music displays the mix of modern straight-ahead, post-bop, mix-meters with a smattering of Latin stylings with a solid, sophisticated, well-structured musical vision.
SHORT BIO:

- Misha Tsiganov is 2-time Grammy Nominated pianist, he was born in St. Petersburg, Russia and graduated from Mussorgsky College of Music

- Prize-winner-diploma of the All-Russia Jazz Competition (1990)

Misha has performed at such venues as Carnegie Hall, Blue Note, Jazz at Lincoln Center, Avery Fisher Hall, Birdland, Iridium and many others.

While living in USA, Tsiganov has recorded over 100 records with different projects.