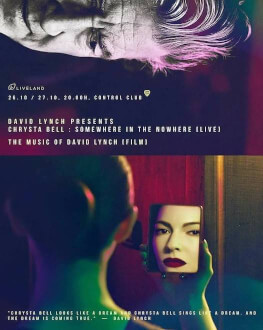 Chrysta Bell is a performing artist, recording artist, and actress who incorporates dynamic theatrical and multimedia elements into unforgettable performance experiences.
During her musical career, she has performed in over 30 countries and shared the stage with musical legends such as bass player Nathan East, guitarist Michael Thompson, guitarist and producer Adrian Utley (of Portishead), superstars Willie Nelson, Brian Setzer and Donovan, as well as members of King Crimson and Yes.

Chrysta Bell has had the great opportunity to write and record songs with iconic film director David Lynch, their collaboration yielding both the haunting "Polish Poem" from his INLAND EMPIRE soundtrack and the critically acclaimed album This Train released in 2011.
Lynch, Chrysta Bell and Dean Hurley have recently completed an EP of new material, set to be released in 2016. Chrysta Bell recorded her second full length album in Bristol, UK, in February of 2016, with celebrated producer, composer and multi instrumentalist John Parish (PJ Harvey, Perfume Genius, Tracy Chapman). To pre-order the album and get access to exclusive content, visit www.pledgemusic.com/projects/chrystabell.

In 2017 Chrysta Bell will appear in the highly anticipated new Twin Peaks series on Showtime.

"... a muse of higher order, a cool siren with a stunning voice of rare dramatic power and range." — Irish Times

"... rhythms are designed to ensnare, and Bell's voice always sounds as if it's emerging from smoke." — LA Times

"... comparisons with Portishead and Massive Attack could certainly be drawn. The dark and fiery guise of Lana Del Rey also came to mind. However, it became evident last night that Bell’s on-stage persona propels her to another level entirely." — The Upcoming (London. Bush Hall)

THE MUSIC OF DAVID LYNCH