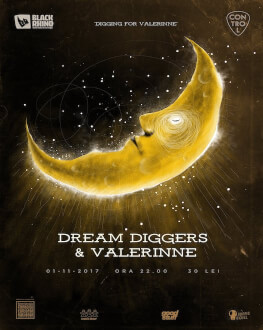 Digging for Valerinne is a concept concert that brings together two of the artists that joined Black Rhino Residence program in 2017.
For this first episode we have invited Dream Diggers and Valerinne, two bands that share a similar passion for sound and atmosphere.

Black Rhino Residency is a programme dedicated to promote collaborations between musical artists We invite in studio bands and producers to work together and create a musical track. Sessions last for two days and aim to promote the process of collaboration, producing and recording a tune. It interests us how artists work and negotiate musical ideas in order to reach a common goal. All sessions are filmed and presented to the public in a musical video consisting of sequences from studio session and short interviews with artists.
We are deliberately leaving the brief very loose to allow artists to be as creative they like, all musical genres are welcome. Noise, bass music, jazz or electronic, rock or rap, the choice stays exclusively to the artist. We just ask these sessions to be carefully crafted.

VALERINNE
Bucharest based band Valerinne came together in early 2012, when Alexandru Daș (guitar/synths/soundscapes), Liviu Stoicescu (bass) and Mircea Smărăndache (drums), joined efforts in their desire to play instrumental, atmospheric, haunting, loud and emotional music, completed by live visuals.
Valerinne’s music takes an organic approach to the post-rock genre. The compositions are ample and dramatic, almost soundtrack-like and evoke a wide range of mental images. The sound spectrum swings from dreamy and fragile to gloomy walls of noise and harsh brutal droning sound intensity.
The band released its debut album, Kunstformen der Natur, in late 2012. Since then they have embarked on a European tour together with Bucharest ambient/drone band Environments, have shared the stage with Amenra, Rosetta, North, Environments, Atlantis, Maybeshewill, Tides from Nebula, Our Ceasing Voice, Stephen O'Malley and have played at the 2013 Dunk! Festival. At the end of 2013 the band released its second album, Arborescent, which thakes the aesthetic of their first release further, yet sounds completely different. In 2016 synths became an integral part of the band’s sound on their third album, Monumenta and the split EP with TAUUSK, Telemetry. The band is currently in the preproduction stages of their next album, Desire, due in 2018.

DREAM DIGGERS
A musical project that gravitates around sound exploration. Having launched two albums, the distinct highlight of the project is the atmosphere it creates, with a mix of low frequencies, syncopated rhythms and guitar tunes with dub echoes.
Released in 2015, "Fear is a lie" starts by telling a dystopian musical story, with warm sitar tunes which then grow and reach levels of militant stanzas. Peppered with many guest artists, "Fear is a lie" introduces Dream Diggers as a project open to the exploitation and manipulation of sound.
On the next release, "To dream is to see" (2016), the acoustic drums and the synth tunes add tension that complement the sound spectrum of Mihnea’s gravelly voice.
Every release sees the band's music in constant motion, experimenting with new frequencies.