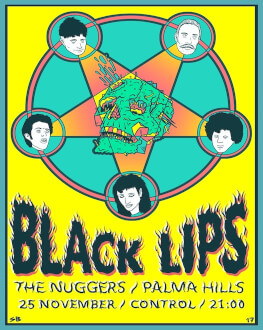 Revealing their savoir-faire of genre-leaping, Black Lips are no strangers to A-list producers. Having worked with Mark Ronson and Tom Brenneck (who played guitar for Amy Winehouse, Cee-Lo Green or Sharon Jones), the Atlanta rockers worked their way from sweaty basement shows to huge crowds at international music festivals. The band saw their audience expand well beyond the garage-punk underground, thanks to Vice coverage that opened the way for a New York Times profile, Conan O'Brien appearances, Virgin Mobile ad placements and amazing live shows all over the world.
-------------
Palma Hills
www.facebook.com/palmahills/

Palma Hills are a young emerging rock band from Transylvania.
The 4 piece band is based in Cluj-Napoca and consists of Butu Arnold (singer, guitarist and songwriter), Lukácsi Előd (guitar), Siklódi Bátor (bass, backing vocals) and László Péter (drums).
They began to play together in 2012, ever since they have released 2 EP’s: Private Section (2014), We’re On The Way, There’s No Worry (2015).
The band was mostly influenced by Garage, Blues-Rock and Indie.
-------------
The Nuggers
https://nuggers.bandcamp.com/

The Nuggers are a garage rock n' roll 5-piece from Bucharest, Romania. They play raw, fast songs about booze, women and nonsense. They formed in 2010. They have an e.p out on Ghost Highway Records and a song released on the Future Nuggets compilation.