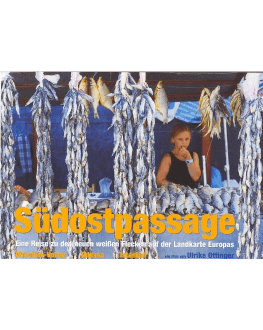 In this dense and complex masterpiece, lasting for six hours and encompassing three distinct parts, Ulrike Ottinger records the travel notes she took during her trip to European places that are supposed to be less exotic for Westerners than the Siberian taiga, Japan, China, or other regions she visited in the past, accompanied by her camera. These are cities and villages from countries such as Ukraine, Turkey, Hungary, or Romania – the latter seen shortly before its adhesion to the European Union, which for a native viewer constitutes a fascinating journey back in time. These are spaces in which the past and the present overlap in some of the most contradictory ways, as they belong to former empires and eclectic cultures, which hosted populations of extremely diverse origins and ethnicities. The tender, curios, not for a moment intrusive way in which Ottinger captures small fragments of the everyday life of the locals, or, oftentimes, immortalizes short portraits of the women as they work, puts the viewer in the most conducive state of contemplation. And the fact that the narrator’s off-screen interventions or the inserts are, most of the times, literary passages by Isaac Babel, Elias Canetti, or Kavafis, who, in other eras, described the places revisited now, open the present towards seemingly unsuspected sensorial, tactile, and political levels. A similar role is fulfilled by the photos from the past which are included in the midst of a scene of everyday life – in a surprising manner and only for a few seconds, each time. The greatest revelation, some sort of ongoing epiphany brought about by this film is that every little corner, no matter how ordinary it might seem to an uninitiated viewer, contains multiple energies and life stories which unravel little by little, if you learn to really look in the depth of things. (by Andrei Rus)