Seven Years in May + Aswang 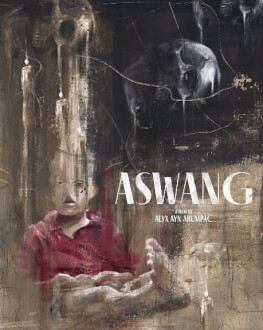 Seven Years in May

The central scene of Alfonso Uchoa’s film unfolds in the warm light of a campfire lit in a field, next to a road on which cars pass from time to time, with the contour of a factory in the background. In front of the fire sit two youths of similar ages. While between them forms a predictable connection, what is indeed unexpected is the nature of the experience they share: the brutality of Brazilian police and the precarious life the two are forced to lead for fear of their reprisal. “Seven Years in May” focuses on Rafaele. In a strenuously detached tone, the protagonist describes the torment he has been put through ever since the police decided to extort money from him based on rumours that he might be in possession of drugs. The documentary juxtaposes this raw confession with stylised scenes, where the confrontation the two have with the police manifests as an absurd game that they could, in fact, put an end to. (by Liri Alienor Chapelan)

“I support Duterte, but what he’s done now is wrong,” sobs the brother of a drug abuser killed during an ample operation orchestrated under the Filipino president’s campaign against drug trafficking, which is estimated so far to have made over 30,000 victims, many of whom innocent or indirectly involved. This scene takes place halfway through Alyx Ayn Arumpac’s debut film and perfectly conveys the sense of ambiguity that enables the perpetuation of such political circumstances: Duterte enjoys remarkable public support and the devastating impact of his measures is felt especially by the most deprived groups in society. Arumpac fixes his camera right in their midst and bravely stands by his biasness: in his film, only the oppressed have the right to speak, to describe the randomness of the killings, the adversity of life, the ubiquity of drugs. As opposed to the malevolent creature from Filipino folklore which lends its name to the film, the evil that befalls these people has an identifiable origin, one that Arumpac’s film intends and without a doubt succeeds to uncover. (by Liri Alienor Chapelan)

TOTUL NU VA FI BINE / EVERYTHING WILL NOT BE FINE