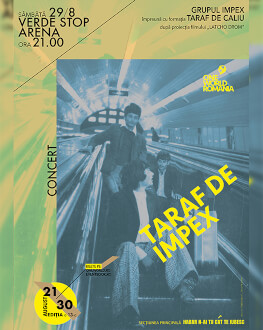 In 1993, Tony Gatliff would make a daring move within the bounds of documentary filmmaking: the docu-musical. Naturally, this hybrid genre calls for some deviations from the rules of documentaries, all in favour of colourful and picturesque vignettes, brimming with emotion through music and dance. “Latcho drom” (“safe journey” in Romani) retraces the historical itinerary of the Romani people, from its cradle-civilisation (India, Rajasthan), passing through Egypt and Turkey, then through the Balkans and finally reaching the lands of France and Spain. The Roma cross the desert, East-Euroopean villages, the Western plains and hills, meandering through different cultures and effortlessly switching from the most ecstatic dance to the most heart-wrenching dirge. The film is not without its dramatic moments during this wandering through places and times: one boy sings about his fate that sentenced him to permanent exile, an elderly Auschwitz survivour mourns and sings the woe of her people, while Hispanic women lament, in song, their homes in Barcelona’s historical buildings, permanently walled up and shut by the authorities. Each of these episodes is a musical number in its own rights, where love of life and tragedy entwine, emerging as the living proof of a nomadic culture, inscribed into history through stories and songs. (by Andreea Chiper)

Taraf de IMPEX is the name of the orchestra made up of two musical ensembles: the IMPEX Group and Taraf de Caliu, the founding members of the famous band Taraf de Haidouks.

This event is meant, mainly, to promote the collaboration between musicians of varying ages and, especially, different ethnicities. This is reflected in the music they make together, resulting in a powerful, motley sound, combining White-Western styles with those of the East, the Orient and the Roma tradition.

Taraf de IMPEX is a musical collaboration between ’lăutari’ (professional Romani musicians) and musicians with classical, rock, electronic backgrounds, or other ‘Western’ styles. Unfortunately, the lack of other such projects shows the ethnic-cultural ‘gap’ between the different cultures and ethnicities of Romania, the Roma and their music being outright shunned, which brings to mind the history of the United States, when African-American music was marginalised on ethnical grounds.

This project aims to spread a message that is pacifist, ‘anti-discrimination’ and to prove that the collaboration between the East and the West and their cultures is possible, that when they do work together the outcome can be exciting and progressive, with the ability to help heal society. The current context of collaboration and cohabitation between Eastern and Western cultures constitutes one of Europe’s main issues, and in Romania, thanks to its multi-ethnical history, has a lot to offer the world. Taraf de IMPEX is the reflection of this cultural-historical wealth of the Romanian milieu.

The performance will start after the screening of the film „Latcho drom” and is part of a series of events in which we celebrate the history and culture of Rome people!