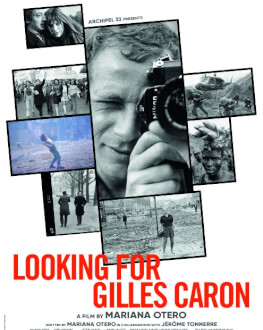 In the early ‘70s, French photographer Gilles Caron suddenly goes missing during a reporting assignment in Cambodia, leaving behind a few of his belongings in his hotel room, several undeveloped film rolls and a mystery that will never be solved. Mariana Otero zooms in on his work, consisting of a few thousand photographs, rolls of film retracing the most important events in the history of the twentieth century: the Six-Day War, the incendiary May ’68, the Northern Ireland Troubles, or the War in Vietnam. By examining the images, we share with her the discovery of the man behind the image of famous photographer for the most renowned magazines (such as Paris Match and France-Soir). Fascinated by the entire repertoire of human gestures, Caron captured details of tender humanity even in the midst of chaos and atrocities, and his photographs reveal a concerned anthropocentrism, rather than a purely esthetic or journalistic interest.

The film is also, essentially, an intimate project, a line of permanent dialogue between the director and the missing photographer, conjuring up images of her maternal figure, having been torn away from her family, just as Giles Caron was from his personal history. (by Andreea Chiper)