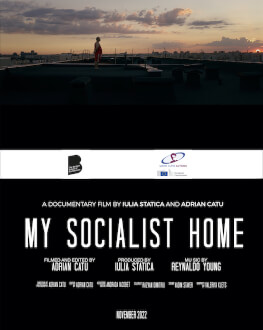 My Socialist Home tackles two major reforms that were initiated under the dictatorship of Nicolae Ceaușescu (1965-1989) in Romania: the beginning of unprecedented mass housing construction (involving extensive demolitions), and the demographic growth that resulted as a consequence of extreme practices to control reproduction, such as criminalising abortion. Although placed in a postsocialist context, the film emerges on the background of these two reforms and captures the lived experiences of six characters who have lived during and after the communist regime in one of the housing blocks built during this period. In spite of the notorious greyness and almost identical exterior of these buildings, My Socialist Home reveals nuanced domestic spaces that had the ability to shape gendered social and spatial conditions, experiences of labour and generational relations, as well as the material affectivity of the home and its relationship to women’s bodies.
--------------------

In Iasi, Romania, there is a house on Iancu Bacalu St. no.11, the last one standing and carrying the community’s history. Soon to be demolished, giving space to the new concept campus - the largest office building in Romania, this house is a symbol of a generation. Which one should a city be responsible for?