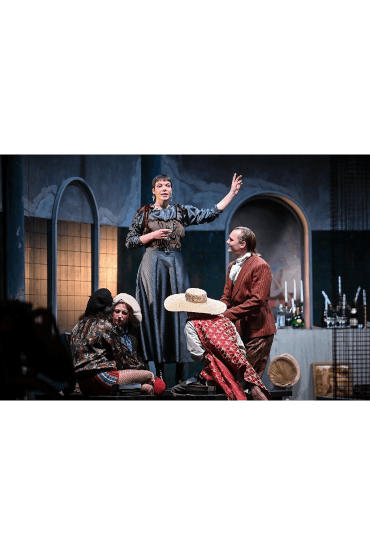 For 101 years the myth of Jedermann has been an emblem of the city of Salzburg, much like the Carnival is for Rio and the gondola boats are for Venice. The play, inspired by medieval mysteries about the death of a rich man, was written by Hugo von Hofmannsthal and it premiered in 1911 in Berlin. The production is the flagship of the Salzburg Festival which takes place in the summer and gathers thousands of tourists from all over the world.

The “Jedermann” reinterpreted and rewritten by Thomas Perle proposes a cynical analysis of a text which is representative of the high German culture, and invites us on an imaginary journey between Salzburg, Ocna Sibiului, and Sibiu.

In Ocna Sibiului, in a once luxurious spa centre built during the glory years of the Habsburg Empire, mr. iedeman is making future plans: he wants a place for skiing just like in Austria. Thus, he intends to cut down much of the forest to create new jobs for the locals. At the same time, mrs. iedeman suffers silently by his side, as their marriage is just part of the bourgeois facade that both of them are keeping up stoically.

“mr. iedeman” by Thomas Perle is characteristic of the capitalist present in which neither natural resources, nor human life is worth more than financial profit. And yet, theatre can change this.

Crazy for you, ediția a IV-a