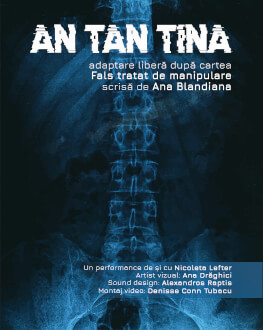 ”Based on Ana Blandiana’s book, “False Treaty of Manipulation," my performance is an attempt to make sense of the politically strange times we are living in Romania. I’m afraid of what censorship meant during the communist era. I’m disgusted by sycophancy for one’s own personal immediate interest. I don’t understand the mentality or credo of the Com-munist system to humiliate human intelligence and replace it with hatred, stupidity and servility.

For me what happened thirty years ago in December 1989 meant an act of courage, and not the manipulation of young people by the Communist system. Likewise, every time I joined the pro-tests in Piața Victoriei in the past two years, and would get close to a group of people chanting “We’re not going anywhere!”, I felt a sense of belonging to that group.

I don’t want to grow old thinking that, “they may have stolen, but they’ve given some to us as well.” We are not a cowardly people, I refuse to believe that! My daughter and I will not be sneaking around in a few years’ time listening to Radio Free Europe trembling in fear.

My performance, “An tan tina” draws a parallel between the type of manipulation employed by the Communists and the one used today. “Through the TV station / you deceived the nation!” (Text by Nicoleta Lefter)

An adaptation of “False Treaty of Manipulation” by Ana Blandiana