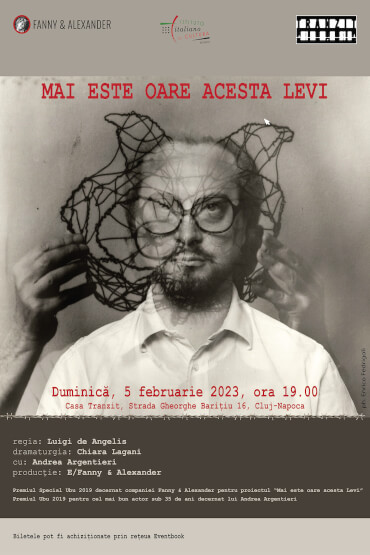 The Italian Institute of Culture in Bucharest, in partnership with Tranzit House in Cluj, presents on Sunday, 5 February 2023, at 19.00, the show

Starting from audio and video recordings from Rai archives and from Youtube, Andrea Argentieri draws his inspiration to play the part of writer Primo Levi, capturing his voice, his gestures, his poses, his tones, his speeches. In a one-to-one dialogue, the author bears a lucid and vivid witness of Nazi lagers. Always guided by the search for truth, which inspired all his works, he selects historical memories with the same no-filter-eye allowing him to explain the unspeakable from the apparently peaceful perspective of reason.

Through the remote acting technique and an outbound approach (“eterodirezione”), experimented by the company in the last 10 years, Fanny & Alexander draw the portrait of the author starting from the impulse of a question: can this witness still somehow be unpleasantly itching? Can this play communicate through the actor’s sensitivity, thought his attempt to let the writer’s original materials have an effect on him? Can the epiphany of a voice, of an embodied-soul sticking to the body of an actor who is much younger that his master, make him feeling the binding power and need for his witness?

Se questo è Levi is an actor’s portrait. It is an attempt to concretely experience the art of account, in a one-to-one dimension with the author.