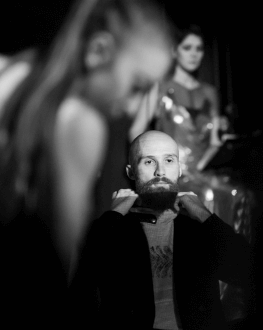 Urban GIF Show is an innovative performance about the city and the way the body is moving in it. Having as starting point two contemporary terms and two already well-known practices, especially when speaking about social media – JPG and GIF, the show analyses the role of the human body and the way in which we move in the city and through our everyday life, using a combination of unique artistic techniques.

The public will rediscover gestures of our daily routine in the city, actions that have their origins in the most common everyday life activities, recomposed and reformulated from an unique artistic perspective.

Urban GIF Show brings a new type of performative experience, using a new artistic practice, inspired by the tools used by animation software – the sequencer, that becomes a virtual tool, a kind of corporal self-programming tool for the performers.

Access to this event is free, but reservations are mandatory on Eventbook -  https://eventbook.ro/program/stagiunea-corp

Urban Gif Show is presented within THE BODY SEASON @ONLINE, an AREAL project.

The price of an access ticket for the performances and movies presented within THE BODY [email protected] is 10 lei, except for the events on November 13th, for which the access is free, but the reservations are mandatory. The schedule of the events is available at www.arealcolectiv.ro or directly on Eventbook at https://eventbook.ro/program/stagiunea-corp.