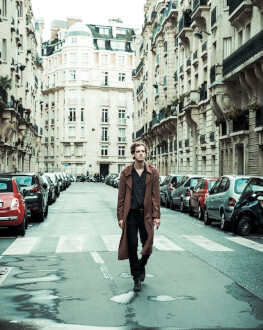 “People do crazy things to get laid,” drawls Belgium’s foremost alt-crooner, Maarten Devoldere, speaking with a definite tone of experience. For his second solo Warhaus album in as many years, the songwriter – and core member of acclaimed indie act Balthazar – comes on like a millennial Leonard Cohen, singing deep, dark and groove-ridden songs of love and hate, managing to be both romantic and searingly brutal at the same time.

The self-titled Warhaus follows 2016’s celebrated We Fucked A Flame Into Being: a lush, moody confessional art-jazz offering named after a particularly sensual line in D.H. Lawrence’s classic novel Lady Chatterley’s Lover. For Warhaus however, Devoldere has ditched the highfalutin’ literary references – mostly. “The big difference is I quit reading for this album!” he laughs. “I literally haven’t touched a book for the last year – it felt liberating.”

The one lingering nod to a more scholarly life comes via the record’s overarching nod to Lolita, resting mainly in the interplay between Devoldere and the album’s female vocalist, Sylvie Kreusch, who is also his girlfriend. “This whole project is about my alter-ego, a dandyish character,” explains Devoldere. I try to sound in control, but if you read the lyrics it becomes clear that I’m completely lost!”.

In these searching, poetic – and occasionally quite amusing – lyrics, he ponders various strains of human emotion, but lust, love and eroticism ring the loudest. Going where love songs rarely go, the softly lit, marimba-laden “Love’s A Stranger” is a woozy meditation on adultery. “We like to believe we’re too romantic for loyalty,” he laughs. The dark strings of “Control” provide a voluptuous backdrop to a story about “the beauty of man surrendering to a woman” that channels Tom Waits at his gruffest while “Everybody” is a ballad like you’ve never heard before, a dirt bag confessional with sing-along chorus. “When their girls are gone, men start watching porn, drink too much and piss in the sink. It’s about that,” shrugs Devoldere.


The silky “No Such High” however sees him ditch the cynicism to write the purest song of his solo career, an ode to how love can beat all temptation. “I’ve never written a song so sweet,” he says. “Sometimes you just feel cozy and warm and want to sing something about it. That’s the first time I’ve embraced those feelings and wrote a love song without a bittersweet aftertaste.” With velvety back-up vocals from Kreusch, the pair’s relationship lends the music an intense kind of intimacy and their contrasting personalities feed further into the sensual sound. “We’ve very different people,” says Devoldere. “She’s this natural force which I don’t understand at all and I’m the guy who thinks everything through. It’s an interesting combination.”

Recorded at home in Belgium, the album came about almost by accident. When it was decided that Balthazar’s hiatus would continue a little while longer, Devoldere found himself at loose ends. He’d been touring the Warhaus project and while playing shows found himself writing a lot on the road – as well as on retreat in Kyrgyzstan with no-one but a local shepherd for company. The creative fires were lit and they burned very bright indeed. “I was sitting on a mountain of songs,” he says.

There was little else to do than to get in a studio and lay them down. A far more spontaneous record than his debut, he gathered his touring band around him and recorded many of the songs as live. “They’re not jazz musicians but they’re good at faking jazz,” says Devoldere of the freeform sessions. “I got a taste for improvisation, to make the songs more alive.” The voodoo rhythms of Dr. John’s seminal 1968 Gris-Gris twinkle throughout the album too, after Devoldere discovered the New Orleans legend and become obsessed with his singular sound.

A playful swirl of contradictions, Devoldere decided to his cap his darkly emotive album with artwork that sees him grinning wildly. You might not know what to think when you see Warhaus, but you’ll definitely know what to feel.