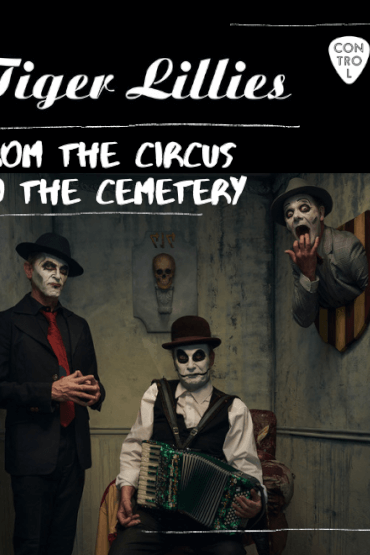 The Grammy nominated Godfathers of alternative cabaret return with a career spanning concert. Expect dark and deviant theatrics as they delve into their back catalogue presenting their most famous songs alongside new surprises.

With an international reputation for being one of the foremost avant-garde bands in the world, Olivier award winners The Tiger Lillies never cease to surprise, shock and entertain with their inimitable musical style, conjuring up the macabre magic of pre-war Berlin and fusing it with the savage edge of punk.

The world of The Tiger Lillies is dark, peculiar and varied, with moments of black humour and immense beauty. This unique, Brechtian street opera trio tour the world playing concerts and theatre shows such as The Tiger Lillies Christmas Carol, The Ancient Mariner and the West End hit Shockheaded Peter.
Always with a touch of twisted humor and sharp irony The Tiger Lillies point an implicit accusing finger back at us: what on Earth are we doing, laughing at this stuff? Their music is a mixture of pre-war Berlin cabaret, anarchic opera and gypsy music, echoing the voices of Bertolt Brecht and Jacques Brel.