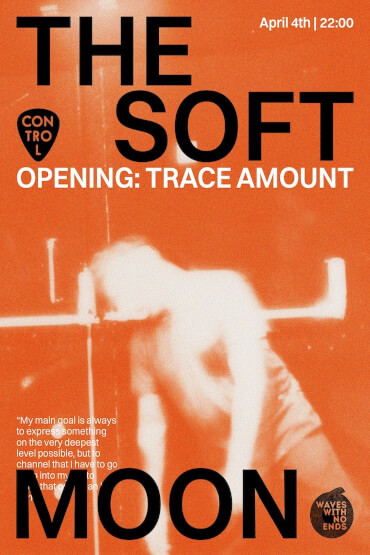 The Soft Moon is an American post-punk and darkwave band formed in 2009 by Luis Vasquez. The band's music is known for its dark and atmospheric sound, blending elements of post-punk, new wave, and industrial music. Their music is characterized by its heavy use of synths and drum machines, which creates a sense of unease and tension in the listener. The band's lyrics often deal with themes of isolation, loss, and self-destructive behavior.

Their debut album, "The Soft Moon," was released in 2010 and was followed by several more albums and EPs. Their second album "Total Decay" released in 2011 and "Zeros" in 2012 which received critical acclaim for its darker and more experimental sound. In 2014, "Deeper" was released and it was a more electronic and experimental album, it was praised for its stark, atmospheric and intense sound. Their fourth album "Criminal" released in 2018, and it was a more stripped-down and intimate album, it was praised for its raw and emotional lyrics.

The band has been praised for its intense live performances and has toured extensively throughout the United States and Europe. They have played at several music festivals and have shared the stage with other notable acts in the post-punk and darkwave scenes. The Soft Moon is considered as one of the most exciting and innovative bands in the genre, and their music continues to evolve and push boundaries with each new release.