Taraf de IMPEX is the name of the orchestra made up of two musical ensembles: the IMPEX Group and Taraf de Caliu, the founding members of the famous band Taraf de Haidouks.

This event is meant, mainly, to promote the collaboration between musicians of varying ages and, especially, different ethnicities. This is reflected in the music they make together, resulting in a powerful, motley sound, combining White-Western styles with those of the East, the Orient and the Roma tradition.

Taraf de IMPEX is a musical collaboration between ’lăutari’ (professional Romani musicians) and musicians with classical, rock, electronic backgrounds, or other ‘Western’ styles. Unfortunately, the lack of other such projects shows the ethnic-cultural ‘gap’ between the different cultures and ethnicities of Romania, the Roma and their music being outright shunned, which brings to mind the history of the United States, when African-American music was marginalised on ethnical grounds.

This project aims to spread a message that is pacifist, ‘anti-discrimination’ and to prove that the collaboration between the East and the West and their cultures is possible, that when they do work together the outcome can be exciting and progressive, with the ability to help heal society. The current context of collaboration and cohabitation between Eastern and Western cultures constitutes one of Europe’s main issues, and in Romania, thanks to its multi-ethnical history, has a lot to offer the world. Taraf de IMPEX is the reflection of this cultural-historical wealth of the Romanian milieu.

The concert will start at 11 P.M. and will take place at Grădina Floreasca Studio.

Victor Plastic will open the night by presenting „My Sadness”. 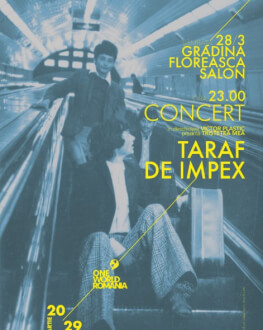