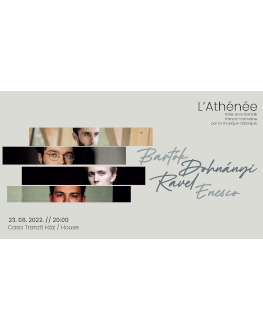 For centuries, France and Romania have been united by a constantly evolving common destiny, with Latin languages as a bridge of intellectuals and artists in constant interaction and many

intersections throughout history. With the desire to highlight Romanian and French musical repertoire, violinists Laurențiu Stoian and Elie Hackel founded in January 2022 the chamber ensemble "L'Athénée".

Bringing together young talents trained in the best conservatories of music conservatories in Europe, "L'Athénée" explores and brings to the fore works by French composers of the Belle Époque and those of George Enescu. Supported in this fresh Franco-Romanian projekt by Professor Adelina Oprean, Sarah Nemtanu (concert master of the French National Orchestra) and Christophe Giovaninetti (former first violinist of the Ysaye quartet), the ensemble will perform the quartet

string quartet no. 1 op. 22 by George Enescu accompanied by duets by Béla Bartók, a serenade by E. Dohnányi and a Sonata for violin and cello by Maurice Ravel.

The figure of George Enescu, who permanently linked East and West through his artistic career, is for them a major source of inspiration, to which they wish to pay homage by creating this ensemble. This concert is the culmination of the first residency of the chamber ensemble "L'Athénée" in the city of Cluj. The programme of the evening recalls the double Hungarian identity and

Romanian identity of the city through the works of major composers from two countries. In Bartók and Dohnányi, rhythms and folk melodies are assumed and go beyond the tonal tradition whose descendants they are. Sonata for violin and cello dedicated to Claude Debussy expresses the subtle impressionistic lines dear to the French composers of the early 20th century. Finally, as a masterly synthesis, the first Enescu's quartet impresses with its expressive density, reverie folkloric reverie and exceptional boldness.

Laurențiu Stoian was born in 2002, in Haguenau, in a family of musicians. He received his first violin lessons from his father, Marius Stoian, at the age of 7. In September 2014, he became the student of Aline Zeller at the Strasbourg Conservatory and took the private lessons regularly with teacher Ayako Tanaka from Paris (first violin soloist of the Lille Philharmonic Orchestra). September 2018 he joined the class of Professor Samika Honda (soloist of the Strasbourg Philharmonic Orchestra) at the Conservatoire of Strasbourg. After graduating from the Strasbourg Conservatory, he started his studies in Basel, Switzerland, under the direction of Adeline Oprean. Laurentiu has participated in numerous academies and master classes, where he benefited from the advice of renowned artists Leonidas Kavakos and Steven Isserlis. In his career, Laurentiu won the first prize and the special prize for performance of a work by George Enescu at the Modest Iftinchi International Violin Competition in Bucharest and the third prize at the International Violin Competition "Arthur Grumiaux" in Belgium.

A passionate and eclectic musician, Elie Hackel was born in 2000 in Haguenau, where he began his musical studies at the age of 6. In 2010 he continued his studies at the CRR in Paris, and since 2017 at the CNSMDP, in the class of Jean Marc Phillips, and is currently working with Svetlin Roussev and Pierre Colombet. Throughout his career, Elie has participated in numerous academies and master classes, where he has benefited from the advice of some of the world's leading artists.

internationally renowned artists. In 2017, he was invited by the Academy European Chamber Music Academy of the Pablo Casals Festival to study the string quartet with the Artis Quartet. Elie Hackel is member of the "Tchaikovsky" class of the Philippe Music Academy Jaroussky Academy 2021-2022 and laureate of the Chamber Orchestra Academy of Paris and of the Orchestre Philharmonique Radio France. He is also a laureate of the Société Générale Foundation "C'est vous

l'avenir" for the year 2022-2023. At the same time, his unbridled taste for Eastern European folklore

Born in France in 1999, Guillaume Florès grew up in a rich musical environment within his family. At first heplayed the violin, then discovered the viola following an encounter with Garth Knox. Seduced by the intimate and warm sound and the important role of this instrument in chamber music, he began to study in the class of Professor Claire Merlet. He is currently studying at

the Conservatoire National Supérieur in Paris, in David's class Gaillard. He has also been tutored by Máté Szűcs, Françoise Gnéri, Nicolas Bône, Sabine Toutain and Claire Désert. In 2018, he won second place in the International Competition for Young Violinists.

Michał Balas was born in 2001, is a cellist and a student at the Basel Academy of Music and the Academy of Music in Łódź. He studies with professors Danjulo Ishizaka and Stanisław Firlej. He is an active soloist, chamber musician and winner of numerous cello competitions. His recent successes include: Grand Prize at the CEA Cello Competition in Warsaw. (2019); first prize and a special prize for a compulsory work at the Johansen International Competition for Young String Players in Washington DC (2018); First Prize at the International Competition Wiłkomirski Cello Competition in Poznań (2018); in 2021, he received Grand Prize at the Dominik Połoński Cello Competition in Łódź. At this competition he was named "Cellist Personality of the of 2021" in Poland. In the same year, he was nominated by National Institute of Music and Dance for the award of the "Treasurer of the Polish Music" in the category "Discovery of the Year". He has performed with symphony and chamber orchestras such as the Symphony Iuventus, Apollo Orchestra, Südwestdeutsches Kammerorchester Pforzheim, as well as with the Krakow Philharmonic Orchestras, Rzeszów, Kielce and Kalisz.