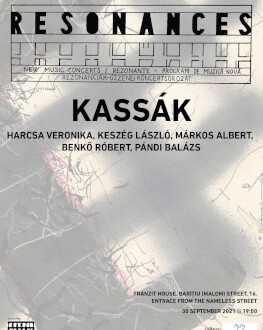 Four musicians and a theatre artist take on the challenge of presenting selected poems by Lajos Kassák on an extraordinary album. Their music faithfully follows the attitude of the poet, known for his free verse. The settings include melodic, song-like structures, free improvisations following the poems and conceptual, avant-garde songs.

A special feature of the project is that, in addition to the performer László Keszég, all the musicians will also perform a poem, thus focusing on the personal experience of the poems.

This is not the first time that Veronika Harcsa has set poems to music: her 2011 album Lámpafény also featured a Kassák arrangement, and as the project's mastermind, she selected most of the poems.  Albert Márkos is also known as a composer for theatre and film, and the evening will include a number of his musical settings. Balázs Pándi and Róbert Benkő are two of the leading figures of Hungarian free jazz. The orchestra's composition is eclectic, and the music they play fits Kassák's tense, contradictory personality and the diversity of the poems, their inherent emotionality and hardness.

The album was premiered in October 2015 in the Glass Hall of the Palace of Arts. All tickets for the performance were sold out in advance.

Graduated from the jazz department of the Liszt Ferenc Academy of Music in 2008 and obtained a master's degree from the Royal Conservatoire of Brussels in 2014.

In 2005, she founded her own jazz band, with which she recorded an album of jazz standards, Speak Low, in the same year. Speak Low was released in Japan in July 2007 on the Nature Bliss label, and immediately jumped to the top of the vocal jazz sales charts of Tower Records, the largest Japanese record label.

The singer's 2008 album You Don't Know It's You featured her own compositions.  The album also topped the charts in Japan and was a jazz platinum in Hungary.  Her best-known song, Too Early, topped the MR2 Petőfi Radio playlist in February 2008. It was voted Hungarian Jazz Album of the Year at the 2009 Fonogram Awards.

His third album, Red Baggage, has achieved similar success both at home and in Japan, where the album releases were followed by two showcase tours.

In May 2011, the fourth album of the Harcsa Veronika Quartet, Lámpafény, was released, on which the group arranged poems by 20th century Hungarian poets. This is the singer's first Hungarian-language album, and her material has been performed at the National Concert Hall of the Palace of Arts and the National Theatre. In 2012, she released her own iPhone application to accompany the album.

The singer is a member of the experimental electronic band Bin-Jip, which has been active since 2010 and with whom she has recorded two highly successful albums and one live recording (Enter CD - 2010, Live at the Planetarium DVD and Blu-ray - 2014, Heavy CD - 2014).

In 2013, he recorded a duo album with Bálint Gyémánt, entitled Lifelover, which was released in Western Europe by Traumton Records, Berlin.

The duo was selected for the Jazzahead! European Jazz Meeting 2015. In autumn 2014, the singer launched a monthly concert series in Berlin with guest artists such as David Friedman, Julia Hülsmann, David Helbock and Samuel Blaser.

Since 2014, he has been running his own courtyard in the Valley of Arts with several concerts, workshops and live acts a day.

Veronika Harcsa has performed at festivals and clubs in more than 20 countries. She has collaborated with renowned artists such as Erik Tru az, Enrico Pieranunzi, Kris Defoort and Nicola Conte, and has performed with the Liszt Ferenc Chamber Orchestra on several occasions. He has performed in contemporary dance productions, theatre and film.

The concert is part of the REZONANCIÁK - New Music Programme.

REZONANCIÁK aims to be a permanent cultural dialogue at local, European and international level.

Tranzit Foundation reserves the right to change the programme.

The concert will be organised in accordance with the current COVID regulations.