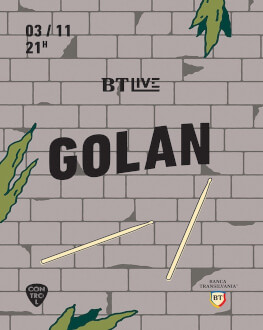 GOLAN is an electronic acoustic three piece band, based in Bucharest, Romania, consisting of Alex, Ernesto and Mihai.
�
Formed in 2013, the group has had one of the quickest ascents in the Romanian electronic music scene. Winners of the "Best Electro" award in 2014, given by "Sunete" magazine, they became instant headliners all over the country. In July 2015, Golan had their international debut at Open'er Festival in Gdynia, Poland.
�
The group is best known for being one of the first local acts that combine electronical music with acoustic instruments, vocal melodies and sampling in this unique way.

Their musical backgrounds mix in Ernesto's exotic percussions, Alex's classic and jazz influences and Mihai's melodic compositions and songwriting.
�
Born in Bucharest, Alex spent a few a years of his childhood in Germany where he picked up classical music studies that he later on continued back home at the National Music University. He plays the trumpet, flute, keyboards and drums.
�
Born and raised in Bucharest, Mihai is a self-taught musician who started writing and producing songs at a very early stage in his life, gaining valuable experience.
On stage, he blends in live sampling, synthesizers and vocal performance.
�
Born and raised in Cuba, Ernesto played the drums and konga in a local cuban band for a few years before moving to Romania. He joined Golan for a new musical experience, being captivated by the idea of combining his percussion skills with the electronical genre. Alongside drums and konga, he also plays the keyboards.