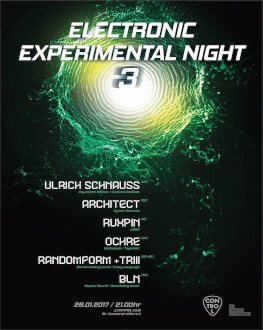 Following the latest album, ‘No Further Ahead Than Today, on 4th November 2016 through his label Scripted Realities, Ulrich Schnauss expresses a renewed interest in more direct electronic sounds, and aims to substitute traditional verse-chorus-verse structures for more freeform atmospherics.
Schnauss is also a talented remixer who has produced re-workings for the likes of Depeche Mode, Pet Shop Boys, Todd Terje, Bryan Ferry and Matryoshka.
Ulrich's version of Bach's ‘Prelude in C’ recently featured on the Decca compilation ‘Re:Works’.

architect is a unique hybrid of idm, electronica and smooth ambient soundscapes. architect's most pronounced quality is their proficient combination of powerful grooves and atmospheric soundscapes resulting in music that is suitable for both listening and dancing.
Created in 1998, architect has always been a mixture of many styles, from bass music to techno, from ambient to breaks, all inexhaustibly explored by german mastermind daniel myer, who has been connected but never belonged to a host of scenes and styles.

Ochre is the work of Newcastle, UK-based artist, Christopher Leary. He has been crafting utopian, melancholic music since 2001, and has released music on Toytronic, Benbecula Records, Village Green and Shipwrec.

« IDM cult master Christopher Leary, the man behind Ochre, is back with a new offering of his dreamy ambience. It’s full of shimmering electronics, crunchy, crispy beats and sweeping melancholic melodies that recall classic electronic stars such as Boards Of Canada. » – NME

Ochre has performed live across the UK and Europe, playing at festivals such as Mira, Bloc and Glade. He has collaborated with artists such as Benet Walsh (The Collectors, Plaid, Leila) and David Sheppard (State River Widening, Ellis Island Sound).

The eclectic electronic producer Ruxpin is one of the leading figures in the Icelandic contemporary music scene. Widely associated with iconic labels such as n5MD and Elektrolux, Ruxpin stays true to his roots by consistently innovating his interpretation of melodic IDM electronic music, intergrating soul and innovation with the scene.

The Estonia-based artist, Jonas Thor Gudmundsson, was born and raised in Kópavogur, Iceland, and became involved with the electronic music scene at very early age, drawing overt influence from artists such as Kraftwerk, Brian Eno, Future Sound Of London, and Vangelis, Gudmundsson recorded his first album of pretty, experimental electronica (1999’s Radio) at the age of 17.

Since 2009, Ruxpin has been releasing his works on the legendary US-based label n5MD – with his most recent album, entitled We Become Ravens, seeing the light of day in late 2016. His performances have reached the ears and eyes of IDM music lovers in over 20 countries. His signature sounds are melancholic melodies, intriguing drum patterns and aesthetic atmospheric soundscapes. Those familiar with the n5MD cannon may recognize the names of the duo behind Asonat. Fannar Ásgrímsson and Jónas Thór Guðmundsson both have released on the imprint before.
Ruxpin also performed at Sónar Reykjavík 18.19.20 February 2016

Electronic music artist, Victor Popescu, aka BLN (Brazda lui Novac) started his solo project in 1997. His latest and the third album is "Moldern", while the second came out at Raumklang Music Records label (DE) in 2011.
His works of the last two years are included on 'Touched 2' and 'Touched 2 remixes', along with Autechre, Orbital, FSOL, Plaid and Arovane. Besides the art of his music, inward creative act that gain him a solid and educated fan base, since 12 years ago Victor works in his studio also as a sound designer for the advertising industry and cinema.

This new collaboration between Randomform, aka Sorin Paun and Emmanuel François Kowandi, who will represent the Belgian and French collective Triii, promises an immersive audiovisual performance and disorienting sound design developed but carefully skinned!