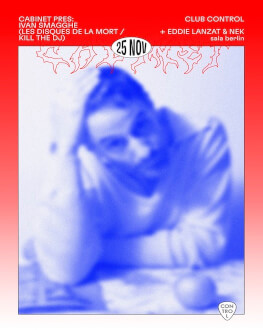 Ivan Smagghe belongs to a top table of DJs that journalists like to lazily describe as “The DJ’s DJ”. He has the ability to play music like a raw conduit between famously obscure records whilst never losing sight of the dancefloor’s strobe soaked bodies - injecting something of himself seamlessly into the mix along the way.

His genre defying/defining production from Black Strobe, It’s A Fine Line and now Smagghe & Cross has connected him and garnered the praise from the likes of Craig Richards, Vladimir Ivkovic, Paranoid London, Optimo, Manfredas, Solar and of course, his long time friend Andrew Weatherall - all fellow crusaders in the fight to prove that electronic music is so much more than a one dimensional soundtrack for a night on the lash, and so much more than an Instagram account. In January 2020, Smagghe & Cross released their second LP, 1819, on Offen Music.

Since 2013, after co-running the legendary french label and parties, “Kill The DJ,” Ivan has been heading up his own imprint, “Les Disques De La Mort”; an outlet for a unique taste in music and spanning releases & remixes from long staples (Manfredas, Cosmo Vitelli, Marco Passarani, I-Cube, Red Axes, Roman Fluegel) & special newcomers (Elles, Sworn Virgins, Zillas on Acid). LDDLM is a label that is always faithful to an instinctively recognisable “style of no style” and the refusal to be pigeonholed. Ivan’s new project “Dresden” (with Lithuanian legend Manfredas) is a celebratory manifestation of this ethos - in party and record label form.