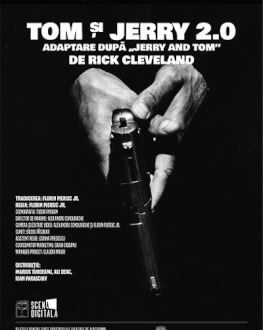 Adapted after “Jerry and Tom”, by Rick Cleveland

It is an action film for grown-ups. It’s a daring text/show on murder and “compassion - one&greatest enemy”, for those who enjoy strong sensations and especially dark humour. “Tom and Jerry 2.0” resembles an American blockbuster that has it all, à la Tarantino. Badass characters. Extreme situations. Adrenaline. Plus, many other questions (and answers) that have always haunted you. Who killed Kennedy? Or Elvis? Who was Marilyn Monroe&real secret lover? What great role should Al Pacino have played? And not least: how is it possible for a bunch of bloody hitmen to become such captivating characters? Deeply impregnated with contemporary American mythology, in which cinematographic influences, marginal underground characters and the violence specific to the end of 20th-century social context converge in a magnetic fictitious world,

Rick Cleveland’s text presents, in an exhilarating fragmented succession, the friendship between two natural born killers who try to conform to the life philosophy imposed by their job. On the line between caricature and gangster (anti)hero, the protagonists in “Tom and Jerry 2.0” offer a cynical foray into the world of those who kill or are killed and who truly believe that friendship can defeat anything. Even though they might be wrong...

Rick Cleveland graduated from the Playwrights Workshop at the University of Iowa and is presently best known for writing the script and producing the American series “Six Feet Under”, as well as for taking part in writing the famous series “Mad Men”. Besides his television activity, Rick Cleveland also wrote theatre plays that brought him fame. Among these, “Jerry and Tom”/“Tom and Jerry” is best known; it was adapted by the author himself for the homonymous 1998 film (directed by Saul Rubinek) with Joe Mantegna and Sam Rockwell.

What Is Love (Baby Don’t Hurt Me)