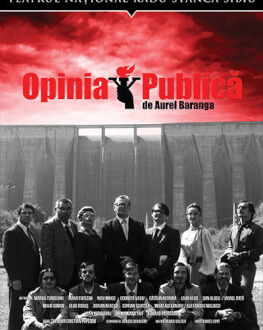 Public Opinion, directed by Theodor-Cristian Popescu, is a show – audience meeting, after the homonym text of Aurel Baranga from the Communist period, presenting an almost anthropological journey which reconstructs, with humor and serenity, the human and social context of those times.

History is ment ​​to be repeated, situations that happened in other times are strikingly present today. Freedom of the press, a principle of democracy, is the theme of the show. Picturesque characters are human types that transcend the era of political oppression and, consequently, the suppression of freedom of speech.

The vivacity of scenes and exhilarating music succession animate the audience in a turmoil of sensations that arise from memories that elicit laughter even to those who have not lived in that period.

The Summer When My Mother's Eyes Were Green@TNRS - Scena Digitala