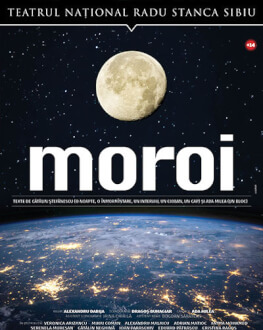 ASSISTANT TO THE DIRECTOR: Bogdan Sărătean

Somewhere in a godforsaken village, a man is watching his own funeral. Shortly after this, a strange appearance terrifies several old ladies who are left unable to describe their terrible fright to the reporters. And the bizarre events continue: a couple is visited by a head, some people start behaving like animals, and a block of flats is often shaken by an invisible force which seems to project the residents in a parallel universe. No, against anything you might expect, “Moroi” is not a terrifying experience, on the contrary, it’s a comical and parodic music-theatre foray into Romanian superstitions, as several scenes illustrate the way in which people relate to supernatural experiences, to the divinity and the forces of darkness, to life and death.

‘There is always a sort of a more or less serious game between “the other side” and “this side”. Depending on the ways people, no matter where they are, see the world, they imagine all the possible maps for the journeys between life and death. The more unknown the territory that requires a map, the more creative the imagination of the cartographers. Nobody can escape the exercise of this personal geography. And, since this exercise can`t be skipped, since it’s compulsory, it becomes the only “Olympiad” in which everyone takes part. It’s ironic! You could call it anything but a competition. However, this is the most disputed contest. And when they realize what they are doing, people stop, laugh, cry and tell stories.

Among many other things, I owe the fascinating experience of writing theatre plays to Alexandru Dabija. And in the case of this particular text, I owe the experience of a stack of books on how the “paths” between “this side” and “the other side” are seen from these parts of the word to Laura Jiga Iliescu of the Romanian Academy’s “Constantin Brăiloiu” Institute of Ethnography and Folklore.’

‘The short text about urban ghosts appeared by accident after a talk with Mr. Dabija and some meetings with a strange old lady. The songs… last summer, between readings about spirits and ghost stories. I’m terribly fond of the show’s “lump-in-the-throat humour”. The coffins on stage don’t hinder our cackles, but Death is present, and she grants us many things, for the final “joke” is hers anyway.’

Performance not recommended under 14 years old