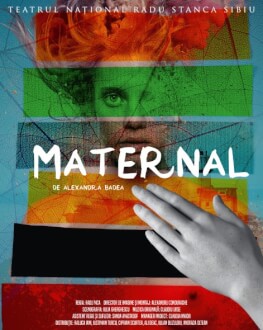 “Maternal”, by Alexandra Badea, directed by Radu Nica – a painful X-ray of the realities in Romanian orphanages.

What does it mean to bring a child to this world? Is it an act of selfishness or of selflessness? Is life actually worth living, despite all the obstacles? Even when the feeling of abandonment becomes overwhelming? Can you still trust the kindness of people when the entire system you belong to is an anomaly? These are just some of the questions posed by the show “Maternal” to the audience, in an attempt to capture a rough, topical, uncomfortable reality of which we should all be aware. The cast of this performance includes TNRS actors Raluca Iani, Iustinian Turcu, Ciprian Scurtea, Ali Deac, Iulian Buzuloiu, Andrada Oltean.

‘The project “Maternal” was born out of the need to understand and mend a more than worrying reality in our society: presently, Romania records approximately 53,000 institutionalized children, i.e. the equivalent of the population a medium-sized town. Considering that ageing population is a very real and worrisome phenomenon of the 21st century, the fact that we are incapable of ensuring a decent future to these children so they can be useful to society makes reality ever more inexplicable and this problem more acute. The text follows the story of a woman who tries to dismantle preconceived ideas, collective indifference and corrupt administrative structures that make it possible for this endemic issue to perpetuate, but at the same time, it captures people’s confrontation with their own limits, mistakes, momentary dismay in their fight against an almost disarming state of inertia of the community. As suggested in the title, the theme of individual vs. collective maternity develops through a vivid, nuanced dialogue, with the text revealing a slice of authentic, troublesome life, though not entirely hopeless, of current Romanian society.’ Radu Nica, director