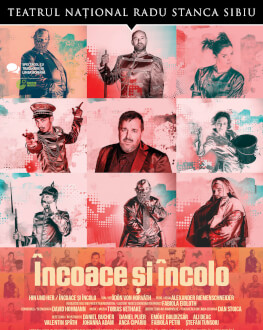 “Hin und her/Here and there” is a sharp critical satire on a topical issue within the European space, i.e. borders and absurd bureaucratic situations faced by ordinary people; this time, it’s not about emigrants reaching Europe, but about European citizens themselves.

The action develops on a small bridge built on an equally small river, which one way or another connects two small states. This no man’s land between the two borders at the two ends of the bridge is the place where the main character, Havlicek (played by Daniel Bucher), is held captive.

Expelled from the country where he lived his entire life and having lost the right to enter the country where he was born - in both cases for purely bureaucratic reasons, Havlicek faces the possibility of spending the rest of his life on a bridge, between the two frontier crossing points.

In the society imagined by Horváth, clerks, politicians and criminals seem dominant in number. Is there room for the forbidden love between the daughter of the customs officer on the right bank and the customs officer on the other bank in this landscape full of small people? Or is this the only thing for which there still is room? Or perhaps the only thing for which there is time?

‘Horvath, the author of the play, places us all in an exemplary place, full of exemplary characters, each of them living at a very fast pace, taking themselves very seriously, even when they aren’t required to, and thus making a shame of themselves; but perhaps this is the reason they all seem very human. “Here and there” talks about borders, this huge and very topical theme of the European space, but in a comical note. In his turn, the author of the play has the courage to write very humorous pieces, even when the action borders the absurd. The text grants opportunities to each actor, regardless of their role’s importance. Together, throughout the rehearsals, we have tried to outline the artificiality of nowadays’ society as faithfully as possible, to create a happy end which, although it is exaggerated and utopic considering the context of our society, we are sure the audience will understand as such.”, Alexander Riemenschneider, director.

Performance presented in German with Romanian and English translation