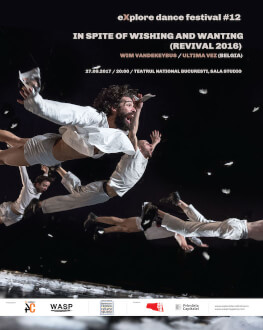 In Spite of Wishing and Wanting

In 1999 Wim Vandekeybus already has a whole repertoire behind him. His creations are universally acclaimed for their intense physical and poetic qualities. His interests have evolved from a quest for instinctive reactions to the inner conscious (and unconscious). His views on and analysis of our man-woman relationships appear to be an endless source of inspiration. And yet, for the production In Spite of Wishing and Wanting, Vandekeybus made a radical decision and set to work with an entirely male cast. With success. This piece was a smash all over the world.

This is because, with the minimum of theatrical resources, Vandekeybus succeeded in capturing risky topics in superb images. Familiar icons of dreams and desires are stripped of their psychoanalytical clichés and converted into the spectacular and poetic dance idiom of Ultima Vez.

The performance derives its power from the organic symbiosis between dance, theatre and film.

Captivating dance sequences underpinned by the sensual soundtrack by David Byrne dissolve into monologues on fear, the desire for security and the dreadful magic of sleep. And there is also the short film entitled The Last Words, made by Vandekeybus himself and based on two stories by Julio Cortázar. A ‘scream-seller’ sells a tyrant his last words, who thereby brings about his own downfall.

The long travelling shots and intense close-ups made with the dancers from the first cast add an extra dimension precisely where the limits of the stage appear to have been reached.

In Spite of Wishing and Wanting is a milestone in Wim Vandekeybus’ oeuvre. In January 2016, Ultima Vez revived this iconic production with a completely new cast.

‘I have exceptional memories of the first tour of In Spite of Wishing and Wanting, in more than 50 towns and cities around the world. For the first time the piece was not about the chemistry between men and women, but about a sort of primal longing in a world populated only by men. Rough, wild, naïve, playful and childlike and made slightly fearful by too many dreams.’