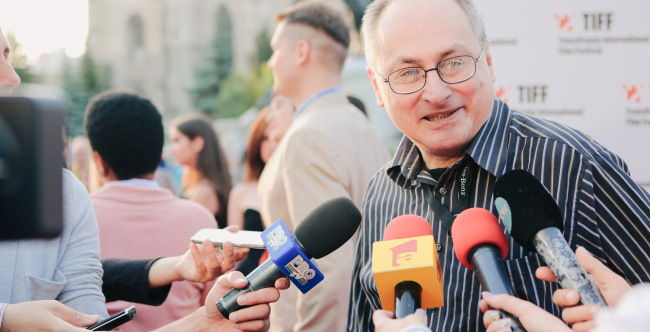 Nae Caranfil, one of the most beloved Romanian directors and a dear guest of the Transilvania International Film Festival, will be awarded the Excellence Award at the 20th edition. The director has been part of the Transilvania IFF history since its first edition, and his latest film, 6.9 on the Richter scale, opened the festival in 2016. In his honor, his first feature film E pericoloso sporgersi will be screened in a newly restored 4K copy.

Widely known by the Romanian audiences for his comedies, Nae Caranfil (b. 1960) explored different genres, from drama and romance to musical comedy. He made his debut with E pericoloso sporgersi/ Sundays on Leave (1993), a lively comedy about the mundane and moody lives of three characters whose paths cross: a high school girl, an actor and a soldier. It was followed by Asphalt Tango (1996) starring Charlotte Rampling and Dolce far niente (1998), with Giancarlo Giannini, François Cluzet and Marguerita Buy. His movie Filantropica (2002) was a huge box office hit in Romania, and The Rest is Silence (2008) won numerous awards and was Romania’s submission to the Oscars. His next film, inspired by real heist that took place during the communist regime, Closer to the Moon (2013) gathered an impressive cast lead by Vera Farmiga, Mark Strong and Harry Lloyd. For his latest film, the musical comedy 6,9 on the Richter scale, Nae Caranfil also composed the music.

The Excellence Award is presented by Mercedes-Benz.