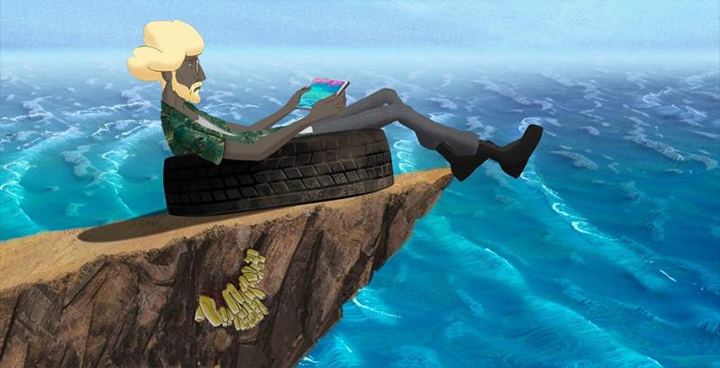 Anca Damian's most recent feature film, the musical animation "The Island" will be screened for the first time in Romania today, at the Students' House in Cluj, within the section "Romanian Days" starting at 6:30. The premiere will be accompanied by the augmented reality exhibition “in Search of Paradise A.R.”, organized by the Art Museum in Cluj.

What was the stone from which the whole story of the animation “The Island” blossomed?
The idea came to me from a conference at the Sundance Festival when I was with one of my short films and it was just being discussed by minorities in the United States that the best thing for decolonization would be to tell the colonizing stories again but from another angle. These have entered the memory of humanity with this connotation of the white colonizer’s footprint in the territory they somehow invade under the pretext of “civilizing” it.
A rethinking of Robison Crusoe readjust to our day means a twist to this story - in which Robison is this time a doctor who has the best intentions because, after all, with the best intentions, society may not let you have an organic right attitude toward the other. The story of the film is, as always, what interests me to communicate, namely that in a society that teaches us separation, what binds us is what matters and that everything and everyone is connected.
All the reality in which we live is valuable, as far as we manage to be part of the whole and not to separate ourselves by race, gender, nationality or age. We are only dividing and separating ourselves, instead of thinking about what connects us and that, in fact, the purpose of being on this earth is to understand that we are a drop of everything and that connecting with others and with nature is the most important lesson we have to learn.

You wrote with Augusto Zanovello. What led you to this collaboration?
Augusto existed at the genesis of this project, in fact, in the discussions we had in the beginning. The moment we listened together to the concert of Alexandru Bălănescu and Ada Milea, I wanted to make this story with Robison Crusoe.
Then, in fact, the idea of making a musical became even more obvious because, to the extent that I managed to turn the story of Robison into a surrealist musical comedy, I threw away the ambition to talk about the subconscious and imaginary of humanity and to enter much deeper territories. Augusto participated more in the start-up part, after which I was pretty much alone on the construction of the script. Because he participated in the project, he remained a co-writer.
What factors have generated this bringing to the forefront of current social issues, such as migration and ecology?
Something interesting when I started the project - I was saying that I want the film to be placed in the near future. The near future came upon us, and in the film, there are many details that can be found nowadays, including the part about the virus and vaccines that was written before 2019. The issue of this moment we are experiencing does not necessarily speak of an end to humanity, but of a need to reestablish the values of society.
The earth will do very well without us, it will have no problem, on the contrary, it will get rid of some parasites. Humanity is at a time when, if it does not rethink its future, if it does not put its future back on other principles – that of connection, healthy principles – in relation to nature, the next generation will not be able to exist in the essential terms: To breathe, to feed. There is, indeed, in the film, a beauty in mutated plastic animals.