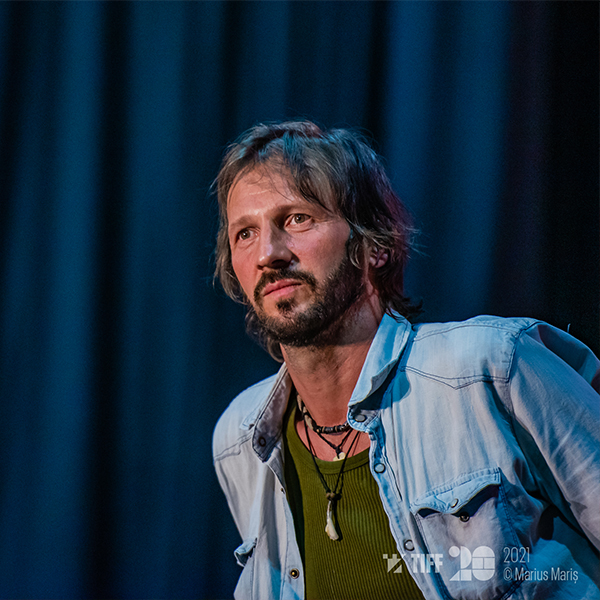 Some of the long awaited Romanian films of the past year will have their screenings at TIFF Sibiu from the 6th until the 8th of August, in the presence of directors and actors.

Friday, August 6, 5:45 PM at Cine Gold, viewers have the chance to watch a movie that received the Special Award of the Jury at the Warsaw Film Festival: Unidentified, in the presence of lead actor Bogdan Farcaș. Unidentified was chosen as the favorite film by the International Film Critique Federation at TIFF 2021, thus recieving the FIPRESCI award.

#dogpoopgirl (dir. Andrei Huțuleac), a film awarded the Best Foreign Film at the Moscow Film Festival and the best Romanian debut film at TIFF 2021 is scheduled to be projected Saturday, August 7, from 6PM at Cine Gold, with director Andrei Huțuleac attending the screening. A single woman and trusted bank employee, Alina Moga is the average corporate worker, with a chaotic personal life but with just enough money to buy herself some sort of happiness. The apparent calm of her existence is shaken by the decision to adopt a stray dog which accidentally regurgitates food on the floor of a subway car. The incident is caught on camera by a teenager who posts it online. Chaos ensues. Inspired by the true events of the Dog Poop Girl incident that took place in South Korea in 2005.

On the same day, Saturday, August 7, starting at 9:45 PM, in the Promenada Sibiu Parking, the debut as a director for Octavian Strunilă, Perfect Strangers will be sreened. The film tells the story of a group of good friends use the lunar eclipse as a pretext for a dinner gathering. It all looks like a typical evening together until the host, Maria, comes up with a game. All guests must place their phones on the table, reading out loud all incoming messages and answering all calls in front of the entire group. The game seems innocent enough at first, but as the time passes we realize that we do not always know people as well as we think we do. Secrets are revealed, leading to an unexpected ending, which calls on reflection.

The father who moves mountains can be seen Saturday, August 7, at 9:45 PM at the ASTRA Museum, in the presence of director Daniel Sandu. Mircea Jianu, a retired Intelligence officer in his 50s, finds out that his son from a previous marriage went missing in the mountains. As any concerned parent would, he travels there hoping the young man will be found alive and well. But after several days of unavailing searches, Mircea decides to take the matter into his own hands...

In the final day of the festival, Augsut 8, from 8 PM, the most recent film of director Marian Crișan, Berliner, will have its screening at Cine Gold, in the presence of actor Ovidiu Crișan. Viorel, a quiet, upright tractor driver from a small town in west Romania meets Mocanu, a high profile politician campaigning for a seat in the European Parliament. Mocanu’s car has broken down nearby and Viorel and his wife welcome the politician into their humble home.

Întregalde, a movie that makes you question generosity and survival, can be seen Sunday, August 8, at 9:45 PM in the Promenada Sibiu Parking, with the special participation of director Radu Muntean who will answer questions from the audience. Screened for the first time at the Cannes Film Festival in 2021, the movie follows three friends who take part in their regular end-of-the-year humanitarian trip, driving an SUV along the mountain dirt roads of the Romanian village of Întregalde. They help a lonely old man reach a sawmill where he supposedly works, but when their car gets stuck in a ditch in the woods the old man continues his journey on foot. Later, the three learn that the sawmill is actually abandoned and that the old man has dementia. The night is near and it's freezing, what should they do?