Premieres, Cine-concerts and 5-star guests at the fifth edition of TIFF Oradea 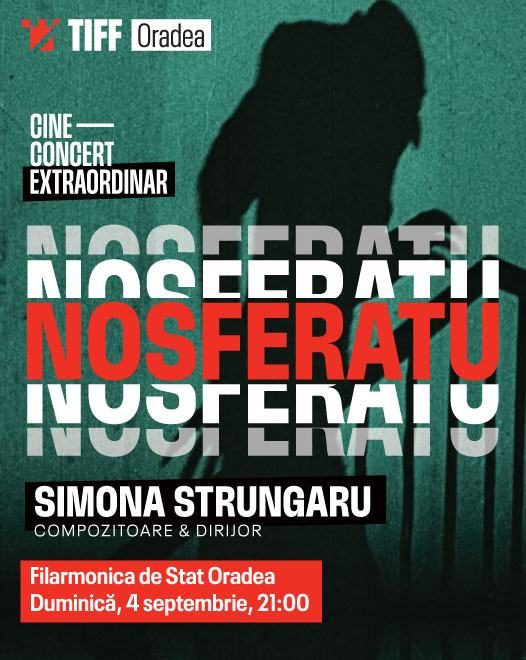 Between September 2 and September 4, the 5th edition will bring to Oradea a wide selection of award-winning films, premieres of Romanian and Hungarian films, media workshops for children, as well as an eclectic selection of Cine-concerts.

Among the events already confirmed at this edition is the Nosferatu cine-concert – the horror masterpiece launched 100 years ago, brought back to life on the music performed by the State Philharmonic in Oradea.

Tickets for the Nosferatu cine-concert were put up for sale on: https://tiff.eventbook.ro/

Based on the novel “Dracula”, written by Bram Stoker, Nosferatu bears the signature of the legendary director F.W. Murnau and is one of the works of reference of German expressionism. The film's release on the big screen in 1922 revolutionized the world of cinema, defining the horror genre, but also generated waves of controversy. Shortly after its release, a court ruled the destruction of all copies, but the film managed to survive to this day.

On the 100-year anniversary of the premiere of the film, the city’s people have the opportunity to watch the original version of the film Nosferatu, accompanied in an absolute premiere by the Philharmonic artists – Sunday, September 4, at 21:00. The musical show will be completed by the performances of soprano Mihaela Maxim, along with Cătălin Petrescu (bariton) and Justinian Zetea (bass), under the baguette conductor Simona, Srunu, Shuna the one who signs and the original music that will accompany the projection.

The Nosferatu cine-concert is organized together with the Oradea State Philharmonic, with the support of the Goethe-Institut.