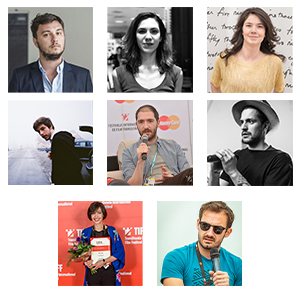 They are young and promising. Their projects have already been acclaimed at national and international festivals. AperiTIFF has selected and presents eight young Romanian filmmakers you should keep an eye on in the upcoming years.

Octav Chelaru was born in Piatra Neamț on 30 September 1991 and studied computer science in Iasi, a field in which he still works in parallel with cinema. He moved to Bucharest in 2016 and, after failing the UNATC admission, had to learn film directing on his own. He made his first short films with money earned from IT and with the help of friends, and the last two of his five, Black Clothes (2017) and The Parallel State (2020), were both selected for the Locarno International Competition. His first feature film, A Higher Law, starring Mălina Manovici and Alexandru Papadopol in the lead roles, was selected in Thessaloniki and in the World Panorama section of the International Film Festival of India and tells the story of a 35-year-old religion teacher and priest's wife who begins a relationship with a 16-year-old student of hers. At TIFF.21, A Higher Law is in the running for the Transylvania Trophy.

Monica Stan was born on 31 May 1985 in Bucharest and grew up in the centre of the capital, where she still lives. After attending the preparatory courses for admission to the UNATC, she decided to study at the Faculty of Foreign Languages at the University of Bucharest, and then studied psychology at Royal Holloway, University of London, for another three years. In parallel, she also wrote screenplays and, after graduating, was admitted to the Binger Filmlab, a programme in Amsterdam dedicated to developing feature film scripts. In 2017 she returned to Romania and a year later she started working for the documentary and human rights film festival One World Romania, where last year she took over as art director. Her first film, Immaculate, co-directed by George Chiper, is based on an experience from the director's late teenage years, who also went through such a centre due to drug addiction, and won the Venice Film Festival's Luigi De Laurentiis Award for Best Debut Film, as well as the Giornate degli Autori section's awards for Best Director and Screenplay by a Woman Under 40.

In a recent interview, Alina Grigore said quite frankly that she would not really like to act anymore, although she has been doing it successfully for more than ten years and runs an already well-known acting school. Alina is now a director and remembers that this is what she used to shout on the street that she wanted to do when she grew up. As usually happens only in movies or fairy tales, her desire has come together harmoniously - step by step, via Piatra Neamt, the United States, Bucharest. In 2016, she worked with Adrian Sitaru for Illegitimate at her acting school, Inlight. This creative encounter gave her the confidence to direct Blue Moon (top award at San Sebastián, 2021). She is part of this growing indigenous wave of actors doing excellent work in film directing. The explanation is logical: a believer in a peaceful, non-confrontational way of working, she understands the ins and outs of acting and knows practically what and how to ask. This draws out a natural style, integrated very well into the story, where some information about the characters gets conveyed subtly, implicitly, layered. Highly aware of her own means, interested in narratively observing the motivations of abusive, bullying conflicts in family or small groups, she manages to become a relevant voice from the first attempt.

Laurențiu Răducanu is a graduate of UNATC's Image Department. This year he won the Gopo Award for Young Hope following his collaboration on the feature films No Rest for the Old Lady (dir. Andrei Gruzsniczki) and And They May Still Be Alive Today (dir. Tudor Jurgiu), as well as the short films When Night Meets Dawn (dir. Andreea Borțun) and Intercom 15 (dir. Andrei Epure), both selected at Cannes in the parallel sections Quinzaine des réalisateurs and Semaine de la critique, accordingly. As a director of photography, he has also worked on films such as Lost Kids on the Beach (dir. Alina Manolache) and A Night in Tokoriki (dir. Roxana Stroe), and was also part of the crew of Touch Me Not, which won the Golden Bear at the 2018 Berlin Film Festival.

Director and screenwriter Alexandru Belc graduated from the "I.L.Caragiale" National University of Theatrical and Cinematographic Arts in Bucharest in 2007. In the same year, his documentary The Sound of Mountains was selected for the Berlin International Film Festival, and a year ago Belc participated in the Berlinale Talents. He then attended the Aristoteles Workshop documentary film workshop in 2009. His next documentary, Rebel//Rebel, was screened at the Vision Du Reel International Film Festival in Nyon in 2010. In 2012, Belc received a Master's degree in Political Science from the University of Bucharest and directed the documentary 8th of March, co-written with Tudor Giurgiu, which was nominated for Best Documentary at the Ji.hlava International Documentary Film Festival. Three years later, he directed the feature film in the same genre Cinema, mon amour, nominated for the Gopo Awards. This year, his feature film debut in fiction, Metronom, was screened at the Cannes Film Festival in the Un Certain Regard section, where it won the award for directing.

Sebastian Mihăilescu is both a graduate of the Faculty of Automation and Computers of UPB Bucharest and of the National University of Theatre and Cinema "I.L.Caragiale" (class of 2013, Cristina Nichituș and Cristi Puiu). He obtained a Master's degree in Film Directing at UNATC in 2015. In 2011 he directed his first audio-video, a music video entitled Duran Duran: Blame the Machines (Genero TV Version). He wrote or directed until 2017 several fictional short films (Honeymoon, Old, Luxurious Flat Located in an Ultra-Central, Desirable Neighbourhood - nominated at Locarno IFF, Hong Kong IFF and Auteur Film Festival –, An Ambigous Geographical Area, But, for Now, Let's Call It a Delta), as well as documentaries (Titza, World Heritage). In 2015 he worked as assistant director on the set of Aferim! by Radu Jude or One Floor Below by Radu Muntean. This year he is at TIFF with his debut feature film You Are Ceauşescu to Me, nominated for the Romanian Days Award, but also selected at festivals such as DocLisboa IFF and ZgrebDox.

Born in 1996 in Timișoara, Ioana Bugarin is one of Romania's prominent young film and theatre actresses. She graduated from the Mathematics-Physics High School in Timișoara and then decided to pursue a career in arts. She studied at the Royal Academy of Dramatic Art (RADA) in London, then at the I. L. Caragiale Academy of Theatre and Film in Bucharest. At the age of sixteen she made her debut in cinema, starring in the feature film A Love Story, Lindenfeld, directed by Radu Gabrea. From 2018 she starts to get parts in more and more productions, a few titles being Moromeții 2, the mini-series Saturday Night Years, Unidentified, The Ladder, Otto the Barbarian and Mia Misses Her Revenge. For the last two, she was nominated for the Gopo Awards 2022 in the Best Supporting Actress and Best Actress in a Leading Role categories, accordingly. She has been an actress at the Odeon Theatre since 2019 and has had roles in shows such as Persona, Kilometre Zero and Juliet without Romeo. She is at TIFF with her latest film, Miracle, in which she plays the main character, the aspiring nun Cristina Tofan.

Conrad Mericoffer is a Romanian actor and screenwriter, born on 4 December 1988 in Bucharest. He graduated from the I. L. Caragiale Academy of Theatre and Film in Bucharest, acting department, in the class of Professor Ion Cojar, class of 2007-2010. He is currently a freelance actor and collaborates with the Metropolis Theatre and the Jewish State Theatre. In 2015 he wrote and directed the short film Casting Call. Since 2009, he has appeared in various film productions, from short films (Vera vs. the Library Bear, The Doll's Eye, Sunday Morning, There Is Nothing in This World and Liniște) and TV series (O săptămână nebună, Fructul oprit, The Sacrifice and Adela - for the last two he wrote several episodes), to feature-length fiction (Closer to the Moon, directed by Nae Caranfil, and Poppy Field, the feature debut of theatre director Eugen Jebeleanu). For Poppy Field he was nominated for a Gopo Award 2022 in the Best Actor in a Leading Role category. He won the award in this category at the Torino Film Festival and Gijón IFF.