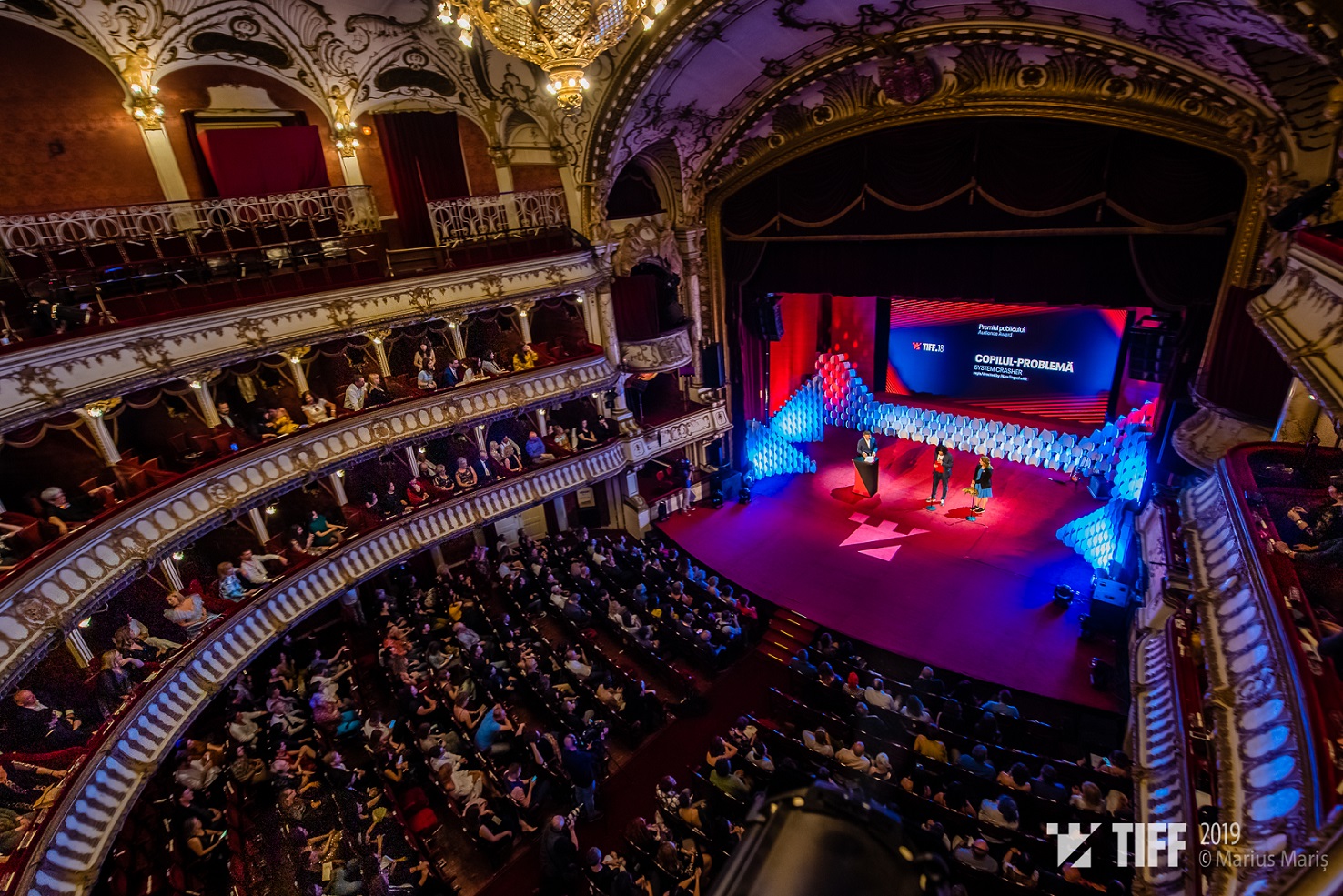 The best films of this edition of the 2019 Transilvania International Film Festival were celebrated Saturday, June 8, at the Cluj National Theater. Monos, directed by Alejandro Landes, was the great winner of TIFF’s 18th edition: the Columbian tribal fable impressed the jury with its masterfully told story of survival, power, and anarchy, nabbing the 15,000 EUR Transilvania Trophy.

The TIFF Official Competition Jury, comprised of directors Denis Côté and Constantin Popescu, producers Mike Goodridge and Anita Juka, as well as Grainne Humphreys, the director of the Dublin International Film Festival, also awarded the 5,000 EUR Best Director prize to May el-Toukhy, “for her confident, mature, and sophisticated direction of Queen of Hearts.”

For his exceptional role in A White, White Day, Icelandic actor Ingvar E. Sigurdsson, who was recently awarded in Cannes, as well, received the 1,500 EUR Best Performance award offered by Conceptual Lab. And Louis Garrel’s romantic comedy A Faithful Man impressed with its “expert casting and witty script,” and was awarded the 1,500 Special Jury Prize offered by HBO.

“I did an experiment this year, and I think it succeeded. I tried to put together 12 films that are not about politics — they just make cinema. They speak of relationships and about ourselves. They are very intimate films,” said TIFF Artistic Director Mihai Chirilov about this year’s Official Competition before thanking all the directors who came to Cluj over the 10 festival days, beginning with Corneliu Porumboiu, who accepted to bring The Whistlers to TIFF only days after its Cannes competition premiere.

Hundreds of guests stepped on the red carpet to attend the Closing Gala hosted by TIFF President Tudor Giurgiu. Vlad Ivanov, Alexandru Papadopol, Andreea Esca, Amalia Năstase, Pavel Bratoș, Dana Rogoz, Radu Dragomir, Jonathan Agassi, Claudiu Mitcu, and Elvira Deatcu are among the big-name actors, directors, producers, television stars, and journalists present at the event, which was broadcast online live for the first time in the history of the festival, and was followed by several tens of thousands of TIFF fans. The show started with a skit presented by Alex Bogdan, the host of the Gopo Awards over the past few years, and was rounded out by a solo performance by American composer and guitarist Garry Lucas, who transported the audience in the National Theater into a special world.

The FIPRESCI Award offered by a jury of members of the International Federation of Film Critics to a title in the thematic section Keeping the Faith went to Clergy by Wojciech Smarzowski “for its skillful manner in depicting priests as both villains and victims” and for its “exceptional central performances, cinematography and welcome addition of vicious black humour elevate the plight of these lonely and damaged characters, all the while avoiding caricature.’’

The Audience Award offered by MasterCard went to the German study of a nine year-old and her struggle against herself, Nora Fingscheidt’s System Crasher, which will be distributed in Romanian cinemas by Bad Unicorn.

One of the most prolific costume designers from Romania, Oana Păunescu, received the Lifetime Achievement Award for her work in Romania and abroad. “Thirty-four years ago when I started out, I was the youngest costume painter. And now I think I am the youngest in my field to receive such an important distinction,’’ the artist said in her speech.

Presented by Cătălin Ștefănescu as “the Romanian actor with the most consistent international success,” the unparalleled Marcel Iureș received the Excellence Award presented by Mercedes-Benz. “Every crazy thing I did at 28 I did here. Part of the molecules of my body are indebted to this city and to this audience,” said the visibly moved actor on the Cluj stage where he made his debut four decades before.

“An astonishing x-ray view of the mental and physical dynamics of torture,” Andrei Cohn’s second feature Arrest received the 10,000 EUR in post-production services Romanian Days Award for Feature Film offered by Cinelabs Romania. Marius Olteanu’s Monsters., previously awarded in the Transilvania Pitch Stop section, received the Romanian Days Award for Debut, valued at 1,000 EUR and offered by Banca Transilvania,  for “the assured, intelligent, and masterful filmmaking that makes it difficult to believe that it is a debut.” A Romanian Days Special Mention went to Nora Agapi’s Timebox for its “lovely , sad and honest documentary portrait of a full life being gradually packed away’’, while Moromente Family: On the Edge of Time, Stere Gulea’s 30-year sequel to his own classic film, received the Romanian Days Audience Award valued at 1,500 EUR and offered by  DACIN SARA.

The Romanian Days Best Short award went to Opinci by Anton Groves and Damian Groves, who received 1,500 EUR in cash and 5,000 EUR in equipment, camera, electrics, and grip from Cutare Film. The jury also awarded two Special Mentions for this section: Anca Damian’s The Call for the “impressive quality of the animation, its poetry and generosity” and Anghel Damian’s Celed for “tension expressed by the child who makes us experience the micro-dramas that make life.”

The 500 EUR offered by PMA for Best Shadows Short Award went to Carlos Baena’s La Noria for “its solid structure and the archetypal imagery.” A Special Mention also went to Tom de Ville’s  Corvidae for the “magical realism of the world it creates.”

Lina Vdovîi was designated winner of the Alex. Leo Șerban Fellowship. The 2,500 EUR offered in partnership with Conceptual Lab will go to the development of the documentary Il Bel Canto, co-directed with Radu Ciorniciuc, which traces the personal story of Vdovîi, a young reporter from the Republic of Moldova, and her father, an immigrant worker in Italy. The board also awarded a 500 EUR Special Mention to Iosif Prodan towards the development of  DOKUMENTAR.RO. And another 1,000 EUR Special Mention for a Romanian actor who registered notable success in 2018 was presented by Vlad Ivanov to Alex Bogdan for his memorable role in Radu Jude’s “I Do Not Care If We Go Down in History as Barbarians.”

The Young Francophone Jury Award offered by TV5 Monde, RFI Romania, and the French Institute, went to Sauver ou périr by Frédéric Tellier. The announcement was made by Frech Ambassdor Michèle Ramis, a guest of honor at the event.

The Transilvania Pitch Stop Eurimages Co-production Development Award, valued at 20,000 EUR, went to Democracy Work in Progress by Mihály Schwechtje. A Special Mention also went to Athlete by Semih Gulen and Mustafa Emin Buyukcoskun. Post-production services valued at 25,000 EUR were offered Chainsaw Europe to Between Two Dawns by Selman Nacar. And a 5,000 EUR award offered with the support of the National Center for Cinematography went to Maksym Nakonechnyi for Spas. Also within the Transilvania Pitch Stop Workshop, the CoCo Award went to Carbon, directed by Ion Borș, who will be invited to participate in Connecting Cottbus East West Co-production Market in Germany.  And a five-day Villa kult Cultural Residency for screenplay development in Berlin was offered to Eva Pervolovici’s  Océane.