“Multiculturality is very familiar to me, I was born into it” 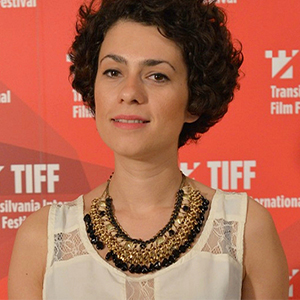 Interview with Cristina Groșan, director of Things Worth Weeping For

How long have you been interested in making films, what are your first memories related to it?

I'm from Arad, making films there didn't seem to be a real, accessible job. Simply because I didn't know anyone who made films, I didn't even go to the cinema as a child, and for a long time for me film meant American blockbusters. I was into theatre, writing and photography, and through these I got to film.

Coming from a half-Romanian family, it would have been easy for you to apply to film school in Bucharest, but you chose to study media design at the Moholy-Nagy University of Art in Budapest.

My parents had a hard time accepting the fact that I would neither become a banker, nor a marketer, nor a secretary. They were strongly against Bucharest, and at that time I didn't dare to argue with them. In the end they let me go to Cluj “to fool around” a bit, after four years I finished the film faculty of Babeș-Bolyai University in Romanian, but that year there was no admission to the master's degree in directing at the SZFE University of Theatre and Film Arts in Budapest, so I applied to MOME (Moholy-Nagy University of Arts). As I looked from there, from Arad, I didn't think anyone could really do film either, so my perspective was only limited to the next step. Next short film project, next possible shoot. If there's a handicap because of provinciality, I think it's this, that people don't trust that this possibility exists for them.

It's often said that it's much harder to make a comedy than a tragedy. Things Worth Crying For is a dramedy, perhaps with elements of comedy to a greater extent. Did you have any fears about how this would work?

It was pretty clear to me from the start that I wanted to make a film with a comedic-dramatic feel, even if the genre is not quite unified yet. Together with my co-writer Nóra Rainer-Micsinyei we started writing the script with this idea in mind. In this film the humour is primarily in the characters, in the situations, in the irony and self-irony, and it is a joy to work with these elements. Humour has a certain rhythm that only works if everything is in its place, which we were able to convince ourselves of during the filming. What was more difficult was not to cut things in the editing, together with the editor Anna Meller, that we had already watched a thousand times, we were bored of them, but a fresh eye could hardly discover them at that moment. It was a learning process that I was able to build on, to a large extent, in my next film.

In America, it seems that indie films and series about imperfect women in their 30s who don't fit in are starting to become a tradition. This wave has also reached Europe, where Norway's Oscar nominee, The Worst Person in the World, develops a similar theme. What is the reason for this phenomenon in your opinion?

The reason, I think, is that there is now an opportunity to make films for that generation that has been concerned about this issue for some time. It's a trend now, but it's not just for the sake of form: it also has content, I find that audiences need stories like this.

Why are you interested in the theme of death? The protagonist, Maja has a rather controversial relationship with it at the beginning of the film.

We were brought up in such a way that the issue of death was kept very far away from us. In the old days, in the country the whole village mourned the dead, together with the bereaved family, death was an event like birth or marriage. Today it has almost become a taboo, we don't talk about it and we quietly fear it. This is one of the reasons why I was interested in how we can open up to this theme throughout an entire night. Like Maja, I spent half a night waiting for the undertakers, which will stay with me for a long time. Sadness comes and goes in waves, the absurdity of the situation and the realisation that our turn is coming when we lie there motionless, but it is not at all indifferent how time passes until then.

If you had to choose between writing and filming, which would be your favourite part?

You can't choose, with each you face different challenges. Currently my favourite is sound design, a huge reward! At this stage the hard work is already over, the material just needs a little fine tuning. Everything in the image starts to feel more alive with sound. Working on the sound post-processing can also ease anxieties during the last phase of editing, the so-called “picture lock”, because at this point you can still make small, decisive dramatic changes, to fine-tune a bit more the storytelling.

Finally, a very material question. What do filmmakers live on between films?

It seems to me that there is always a conundrum in this profession: what does a director live on between two projects, if he is not directing, say, commercials. But it shouldn't be taboo, and directors have phone bills and pay rent at the beginning of the month. I, for example, really enjoy photography and graphic design, I do visual communication for cultural events and I also work with publishers on cover design. It's a very different job, I work in a team, but I do my work alone (with a laptop) in a quiet place. If I have a less hectic time, I can also make time for developing projects, writing, going to workshops, so for me it's a combination that works.