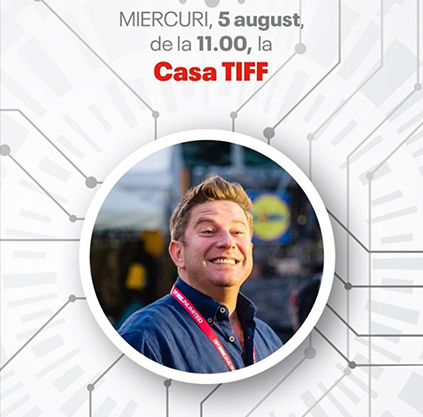 The daily dose of InspiraTIFF is brought to you tomorrow, the 5th of August, from charismatic actor and director Pavel Bartoș. The audience has the chance to meet him from 11 AM, at Casa TIFF. Access to the event is free of charge but the places are limited.

Pavel Bartoș started his career on the stage of the puppet theatre Puck, in Cluj-Napoca, in 1993, after graduating from the Faculty of Theatre, Babeș-Bolyai University. He played on the stages of theatres from Satu-Mare and Timișoara and has been an actor of the Odeon Theatre since 2001. He made a remarkable career on TV, presenting several shows and acting in many successful TV series.

Last year, Pavel made his debut in filmmaking with the short film ”The Romanian Tradition”, a comedy based on a true story that unraveled at a countryside wedding. The movie was presented for the first time, at the Transilvania International Film Festival.