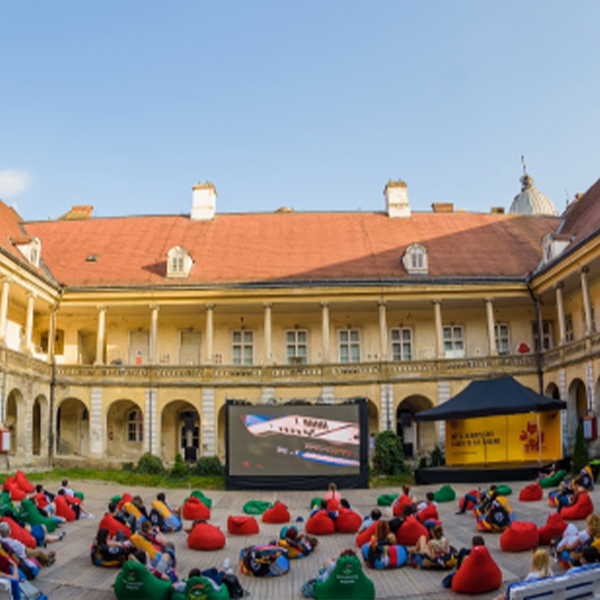 If TIFF is memorable, it is also because of the photographs Nicu Cherchiu took over two decades. Stars, audience members, unique cinematic or musical moments remain suspended in time by Nicu’s talent.

transposing basic concept of Brâncuși’s work into new technologies that allow visitors to experiment with his sources of inspirations and look at his work as a mirror for their own interests.

Started in 2010, Wild Romania has become the largest nature photography and documentary project in our country. It was initiated by photographer Dan Dinu in collaboration with World Wide Fund for Nature, with support from RNP Romsilva and implementation aid from the Natural and National Parks Administration. The Exhibition contains 50 of the few hundred photographs done in the last 10 years of work.

In 2021 Lucian Broscățean celebrates 20 years since he was discovered and awarded by Doina Levintza, so to mark the occasion he created an anniversary collection presented as both fashion film and campaign, both directed by Andrei Măjeri. In the National Gallery of the Art Museum, a curated selection of pieces from this anniversary collection will be set in dialogue with baroque and Biedermeier pieces for TIFF’s own 20th anniversary.

In a time when fashion gets closer and closer to commerce, YDEAS — Young Designers Exhibition and Shop — offers a return to essence and to art. The event spotlights the most original recent projects fashion and decorative design projects of young designers based in Cluj and beyond, offering an unconventional alternative for interacting with fashion beyond the transactional equation between designer, product, and client.

A trans-media projects about the way life changed for people in apartment buildings all over the world. Collecting stories along several floors of one fictional building, our team recreated the intimate relationships between us and our own neighbors. Group show of Digital and Interactive Arts and Documentary Film Masters Students from the Theater and Film School of the Babeș-Bolyai University in Cluj. Curator: Cristina Pop-Tiron

The year that was no longer the same...

The emotional rollercoaster of 2020 is seen as a year about inside, about our literal and figurative interior, by Versus Visual Project. Over tea, four people came up with this idea for a show about some of our stories from behind closed doors. Photos, videos, and live performances tell stories to which all of us can relate.

Space as a component of artistic creation is the theme for a show that brings together three art structures: Gara Mică, the artist-run E T A J, and Pastila Roz at Rubik, the manifesto space of the Paintbrush Factory. Seeking the annulment of monolithic universes, the exhibition proposes the fragmentation of multiple perspective on art as seen by the practice crystallized around the Matryoshka in the current grouping on the local scene.