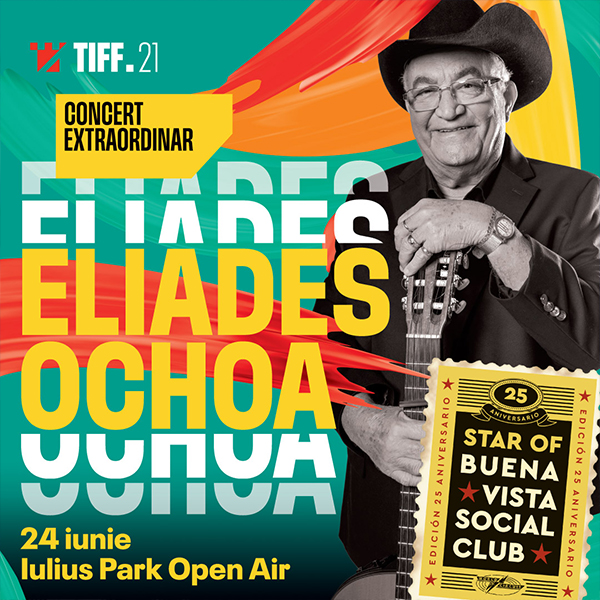 Eliades Ochoa, who became famous worldwide in the late 1990s as a founding member of the Buena Vista Social Club, is "one of the best guitarists of his generation" (The Guardian), an iconic figure in Latin American music. Composer and performer of unmistakable songs such as "Píntate Los Labios Maria", "Chan Chan" or "El Cuarto de Tula", Ochoa's music is closely linked to the intense history of Cuba. A true keeper of tradition, Eliades Ochoa is the winner of numerous Latin Grammy Awards and one of the main characters in the 1999 Oscar-nominated documentary directed by Wim Wenders: Buena Vista Social Club. The film will have a special screening at the Transilvania International Film Festival 2022 edition, to mark the artist's presence in Cluj.

Eliades Ochoa's concerts are a celebration of Latin American music and passion, full of melancholy, but also of joy and dance. His unique style of playing the guitar and vocals made him a superstar of traditional Cuban music.

Eliades Ochoa will perform with his band Grupo Patria at TIFF2022 on June 24, at Iulius Park Open Air. Tickets are on sale online: https://tiff.eventbook.ro/music/bilete-tiff-2022-concert-eliades-ochoa

During the pre-sale period, until June 10, the price of a ticket is 70 lei.

Also known as a "Cuban Johnny Cash", thanks to his cowboy hat, Eliades Ochoa was born near Santiago de Cuba, the second largest city in the country after Havana, to which he is extremely attached. "I would not give Santiago to any other city in the world. I have never changed my rhythms and music, I am just a child from the country who sings today as he learned from his parents ".

Throughout his career, which spans several decades, he has collaborated with many Latin American artists such as Omara Portuondo, trumpeter Manuel "Guajiro" Mirabal or trombonist Jesús "Aguaje" Ramos. He was the leader of the Cuarteto Patria group. Ochoa's discography includes over 25 of his own albums and hundreds of collaborations that have sold millions of copies worldwide. His most recent recent albums include "AfroCubism" (2010), "El Eliades que Soy" (2014) and, most recently, "Vamos a bailar un son". (2020)

In 2018, the musician's life and career were the subject of the documentary "Eliades Ochoa: from Cuba to the World", directed by Cynthia Biestek. The film was part of the official selection of the Miami Film Festival.

In Cluj-Napoca, Eliades Ochoa will perform songs from the Buena Vista Social Club period, but also from his latest albums.