Csaba Káel: “It is very important to focus on the youngsters” 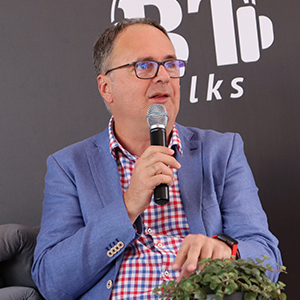 Csaba Káel (born in 1961) graduated as a film director from the University of Theatre and Film Arts, Budapest and directed several television plays, shorts, commercials, portrait films. His debut feature film Bánk bán (2002) was screened all over the world. Since 2011 he is the CEO of the Müpa Budapest, Hungary’s internationally acclaimed cultural institution. In 2019 he was appointed Government Commissioner for the Development of the Hungarian Industry, he is the Chairman of the National Film Institute. For his work he received numerous awards and recognitions like the Kossuth Prize, Nádasdy Kálmán Prize, Merited Artist of Hungary, Cultural and Touristic Ambassador of Budapest, Knight's Cross of the Hungarian Order of Merit and the French Legion of Honour.

He is present at TIFF to talk about the National Film Institute’s activity, which operates in many directions: development, distribution, and marketing of domestic cinematographic works, including financial and professional support; restoration of the Hungarian film heritage and its preservation, distribution, and promotion; support for the training, education, and career orientation for young professionals in the industry; international sales and festival representation of Hungarian films; international promotion of Hungary as a filming location.

How important is TIFF for Hungarian Cinema and for you personally?

It is a very important event, the biggest Central European festival and for us it is extremely important to collaborate in this part of the continent, for distribution, which should be the first topic of discussion in Europe.

When we are negotiating with the government about the yearly budget, and we have such international support it is easier to ask for more money. Above 600 million US dollars spent in film production per year are recognizable in our GDP, so filming became a strategic industry from both economic and touristic point of view. In this part of Europe there are very interesting people, wonderful landscapes and fantastic cultural values, we have to use this richness.

Your country is very successful internationally, so is there any secret other emerging countries could apply?

Hungary’s success is coming from the past; we have a 120 years history of filmmaking. We always produced high level movies and many of our directors, talents went to Hollywood and became world famous. When I was young, for us to be a filmmaker was a dream. This is a very exciting profession. It is very important to focus on the youngsters as the future of our screen sector is in the hands of the next generation of filmmakers.