#TIFF2022 is taking the first steps on the Moon: Invaders bring to Cluj-Napoca a stelar cine-concert - Moonwalk One 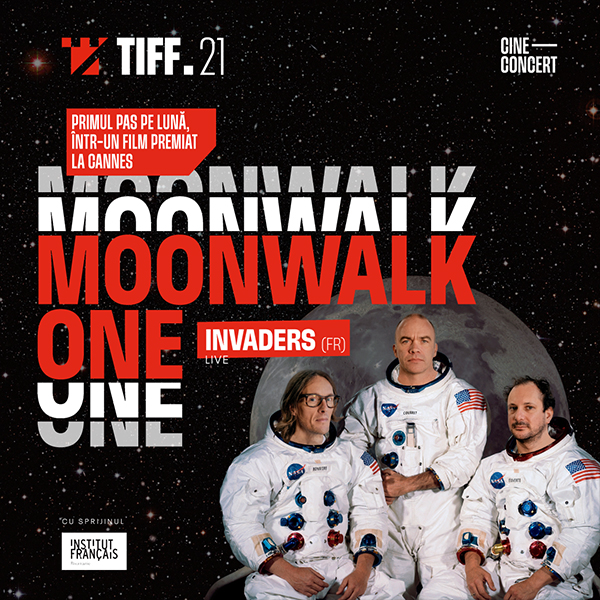 In 1969, the whole planet watched with bated breath as mankind took its first step on the Moon. This year, the Transilvania International Film Festival (17-26 June, Cluj-Napoca) invites filmgoers to relive the excitement and intensity of that legendary event in a sensational cine-concert. Moonwalk One, the film that tells the spectacular story of the Apollo 11 mission, can be seen on June 21st at the Students’ Culture House in Cluj-Napoca, accompanied live by French artists of Invaders.

Moonwalk One combines NASA archive footage with the reactions of people from all over the world who watched the Moon landing on their televisions. Exploring the philosophical and poetic dimensions of the unprecedented mission, the documentary directed by Theo Kamecke recounts the lunar event as it was experienced at the time, as an incredible human adventure. Set to the music of the French group Invaders, special guests at #TIFF2022, the scientific epic succeeds in capturing the intensity and drama of the moment that marked human history. The original composition that will accompany the screening of the documentary is nuanced by Kraut and Space Rock, two musical styles that emerged in the late 1960s and that were inspired by space exploration.

A musical group founded by Nicolas Courret, the artist who will accompany the screening of the film on drums and synthesizers and who created the musical samples that will form the basis of the original orchestration, Invaders started out as a duo with pianist David Euverte. Specially for the Moonwalk One cine-concert in 2020, Nicolas Bonniere joined the band, as he will spice up the original sound with chords and special effects on electric guitar. The three musicians invited to #TIFF2022 promise the audience an evening at (almost) zero gravity.

Nicolas Courret was the drummer of the rock group Eiffel and has worked with artists such as musician Bertrand Burgalat, writer Michel Houellebecq, The Married Monk band and singer Olivier Mellano. He also frequently composes music for the theatre, working with artists such as the famous French company Royal de Luxe (street theatre with giant mechanical puppets) or with David Euverte for the children's series "Dans La Toile", directed by Emma Carré. Passionate about cinema, before the MoonWalk cine-concert, Nicolas Courret created the music for the iconic horror film "Carnival of Souls", directed by Herk Harvey.

Cine-concert Moonwalk One is a coproduction Clair Obscur / Traveling Festival, Le Jardin Moderne, Les Tontons Tourneurs with the support of the Departmental Concil of the city of Rennes.